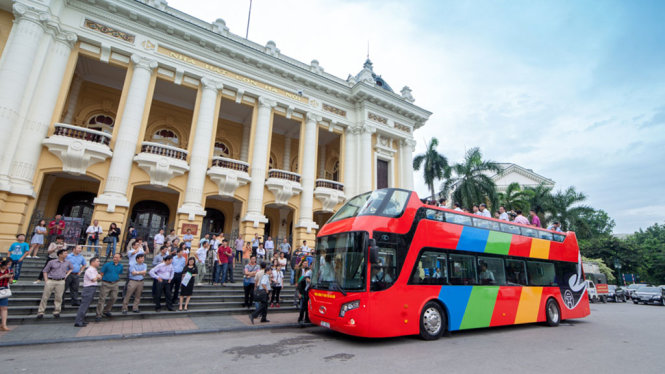 Though Hanoi and Da Nang have already introduced their own fleet of double-deckers for tourists, the trial program has been temporarily put on hold until new directions are given by the premier, the transport ministry said in a document on Thursday.

In March 2017, the transport ministry began soliciting feedback on a draft plan on employing passenger buses to boost tourism.

As of last month, the ministry received responses from its finance, public security, and tourism counterparts, as well as authorities from the seven localities where the pilot program was launched.

While the transport ministry did not specify whether the responses have cast the double-decker program in a negative light, it did request that the pilot program be ceased, “pending final feedback on the March 2017 draft plan from the prime minister.”

The two-story bus service had its test run in Hanoi on June 31, using open-top buses equipped with an automated voice system to introduce and share details about each tourist destination on its route.

In Da Nang, a fleet of more than ten double-deckers, collectively worth more than VND60 billion (US$2.64 million), made its debut in mid-July.

The buses also have open upper levels and were expected to offer ticket-free trips for 30 days before the program’s official launch in September.

That plan will be rescheduled in light of the transport ministry’s latest request.

While a plan to deploy double-deckers for tourism in Ho Chi Minh City has yet to be enacted, the city’s only pair of two-story vehicles is slated for retirement at the end of this year.

The vehicles, capable of carrying 120 people each, were put into use in February 2005 and are currently in use on the No.6 route, connecting Nong Lam University in Thu Duc District with the Cho Lon Bus Station in District 6.

The operator, Quyet Thanh Cooperative, has said it will put the buses on sale for VND100 million ($4,400) each as the business is no longer profitable.