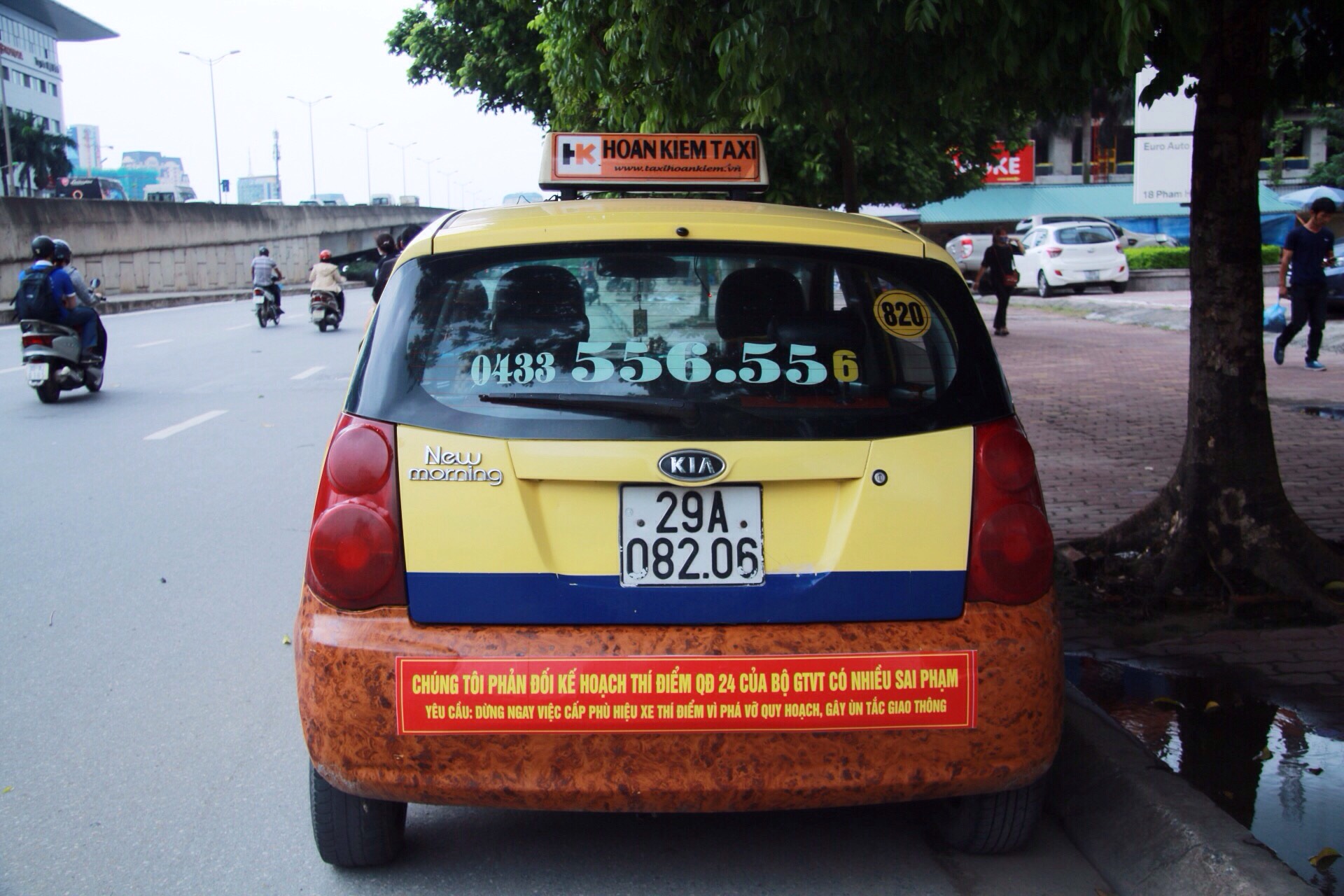 Hundreds of cabbies in Hanoi are placing bumper stickers on the back of their vehicles in opposition to the Vietnamese Ministry of Transport’s decision to allow ride-hailing apps Uber and Grab to be piloted in several locales.

The demonstration is a joint effort by prominent taxi brands in Hanoi such as Mai Linh, Vina, My Dinh, Sao Thu Do, and Hoan Kiem.

“We object to the wrongful pilot scheme approved in Decision 24 by the Ministry of Transport”; “We demand an immediate stop in issuing more logos for pilot vehicles”; and “50,000 vehicles under Decision 24 reported a revenue of VND18 trillion [US$793 million] but only pay VND15.8 billion ([$696,000] in taxes” are among the stickers now common on Hanoi’s cabs.

Decision 24, issued in January 2016 by the Ministry of Transport, allows ride-hailing apps to be legally piloted in five provinces and cities in Vietnam, including the capital.

The two-year pilot scheme launched in January last year as a means of paving the way for taxi-hailing apps such as Uber and Grab to become licensed to legally operate transportation services Vietnam.

Last Tuesday, the Hanoi Taxi Association sent a formal petition to multiple Vietnamese leaders and relevant authorities demanding that the pilot program be prematurely terminated by the end of September and a review be issued to evaluate its “consequences.”

The petition said the pilot scheme has led to “insecurities” within the community and calls for the immediate cessation of allowing cab-hailing services to contract with more drivers.

It also requested that Grab and Uber publicize data on the number of vehicles operating under their service and the number of trips made by its drivers to ensure that they are adhering to regulations on maximum working hours and speed limits.

However, Do Quoc Binh, chairman of the Hanoi Taxi Association, told Tuoi Tre (Youth) newspaper on Wednesday that the bumper stickers were the spontaneous ideas of separate taxi firms and have nothing to do with the association.

“They have the right to put bumper stickers on their vehicles as a demonstration of their objection to the decision, which violated their rights. The stickers draw public attention to the situation,” Binh explained.

Traditional taxicabs and ‘technology-assisted taxis’ – a nickname coined by local media to refer to services such as Grab and Uber – have been engaged in a feud since the latter entered the local market.

Taxi associations in Hanoi and Ho Chi Minh City have repeatedly called for stricter regulations on their technology-based rivals.

Meanwhile, Grab and Uber drivers have faced assaults by conventional ‘xe om’ drivers who feel the harsh competition has put a strain on their livelihoods.