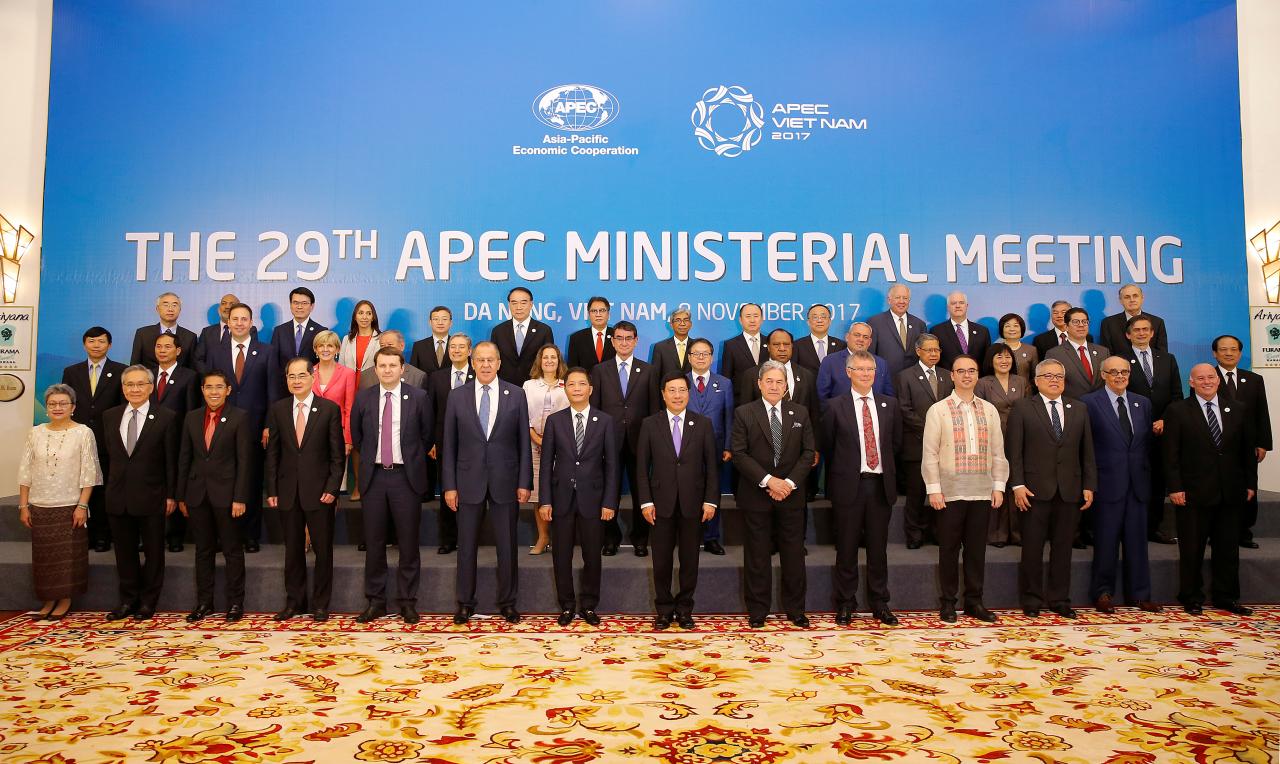 On Saturday, the leaders of the world’s largest and most dynamic trading corridor, hosted by Vietnam President Tran Dai Quang and joined by newcomers including United States President Donald Trump, convene in the central Vietnamese port city of Da Nang for their annual Asia-Pacific Economic Cooperation leaders’ meeting.

Together, these 21 leaders will attempt to align their ideas for making trade between APEC economies work better in the common pursuit of growth and job creation back home, with enormous implications for their three billion constituents and the rebounding global economy.

For all the stakes, APEC has over the years lived up to its name as a cooperative forum for tough economic issues, enabled by its enduring focus on voluntary, non-legally binding policy prescriptions for easing trade bottlenecks like tariffs, administrative red tape at borders and mismatching standards that raise costs for businesses and consumers.

Approaches agreed to by consensus are in turn adopted as the vision for technical coordination among the diverse economies of APEC, which, in all, account for half of global trade and 60 percent of the world’s GDP.

Beyond these sometimes unwieldy deliberations, high drama at the APEC table, as in Bali, Beijing, Manila and Lima most recently and in Hanoi in 2006, includes what traditional attire the leaders will adorn in their “family photo” at the invitation of the host economy. The custom is a lighthearted display of cultural understanding and partnership. Only these are hardly routine days for trade in the Asia-Pacific or elsewhere.

So where do things stand? On the bright side, after three decades of proactive efforts by APEC member economies to improve their connectivity and trade-driven growth, we have seen upwards of a billion people lifted out of poverty in places like China, Mexico, Peru, the Philippines and Vietnam, and into the ranks of the middle class – the biggest achievement for economics in the history of the world.

The potential to take advantage of these emerging growth drivers extends to workers, businesses and a new generation of digitally empowered entrepreneurs in advanced economies too – whether they are very large like Japan and the United States, relatively small like New Zealand and Singapore, or somewhere in between like Australia, Canada and Korea.

All told, these trends are today powering exports and a return to growth in the region, as reflected in the latest forecasts in APEC, and the global economy along with it. There is a flip side to all of this, however. For all the progress unfolding in the Asia-Pacific, challenges in the global and regional trading environment and to the institutions that support it put this momentum at risk.

The swell of populist misgivings towards globalization in some areas, most profoundly manifested in the Brexit and subsequent events in developed economies over the last year, has brought genuine questions about the fairness of trade and who benefits from it into greater focus.

The potential composition, impact and desirability of new, bigger and more sweeping trade agreements such as the Trans-Pacific Partnership and Regional Comprehensive Economic Partnership are the subject of correspondingly heavy scrutiny by proponents and detractors.

The rules of trade as governed by the World Trade Organization, intended to kept markets open and trade buoyant, are showing signs of fraying over dispute resolutions and modernization requirements.

The rapid pace of technological change has moreover raised concerns about automation replacing workers like those on assembly lines, at banks and airport check-in desks, and behind the wheel. And e-commerce and big data has fundamentally revised skills demand and the meaning of security in one fell swoop.

In an inextricably interconnected world, these challenges are not limited to any one economy or group of economies, developed or developing, big or small, market or non-market. They are challenges that all of us now face. But they are clearly proving hard for the trading landscape and the institutions around the world that underpin it to handle.

APEC’s leaders in Da Nang, traditional clothing and all, are in a position to lead the way forward in dealing with these issues, helped by the flexibility and room for innovation, say, in digitally driven trade, startup promotion and even adjustment schemes and safety nets, made possible by the loose cooperation between them and their economies. Inroads in such areas would make a real difference.