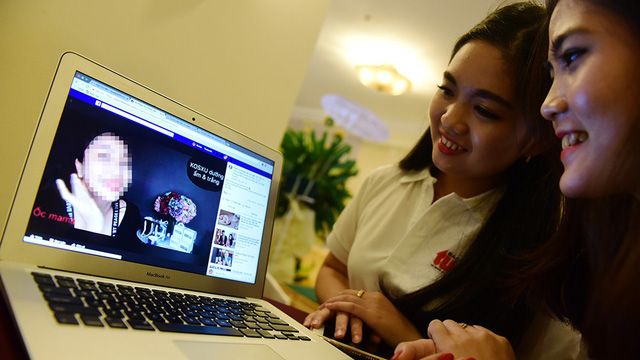 Facebook livestreaming a new medium for celebrity ads in Vietnam

Brands in Vietnam are hiring celebrities or ‘social media influencers’ to promote their products via the Facebook Live feature, a new form of commercials allowing them to defy both the advertising and tax rules.

Facebook Live, launched in August 2015, is a live video streaming service allowing users of the world’s largest social network to broadcast themselves live and communicate with their audience in real time.

Many Vietnamese celebrities and key opinion leaders – individuals who are popular on social media – are being paid by companies to promote products and brands through carefully-scripted and well-executed Facebook Live broadcasts.

This new form of publicity allows companies to promote products whose advertising is being banned as per the law, just like dietary supplements or alcohol.

Many experts believe that companies also avoid tax obligations with those ‘live-streamed ads.'

It is common for Vietnamese celebrities to sit in front of their smartphone camera and meet their huge fan base on social media via Facebook Live in the evening, especially during weekends.

The celebs would normally begin their livestream session with chit-chat with fans, waiting for the number of viewers to reach a certain level, before beginning the main part – talking about the products they are hired to promote.

A pop star can tell fans how she takes care of her skin before sleep with this cream of company A, or goes on a diet with dietary supplements of company B, while a well-known actress may broadcast herself talking to fans while enjoying services at a newly-opened spa.

The celebs would repeatedly mention the names of the products being advertised, as well as where to find them.

One popular TV host usually live-streams herself on Facebook near midnight talking to her fans and reading them a few book pages, before going to sleep, never forgetting to broadcast herself applying facial masks of a famous brand.

Other social media influencers also offer ‘gift-giving’ sessions on their Facebook page, encouraging fans to watch until the end of every livestream, which in turn increases the engagement of their audience with the products being promoted.

Huong, who sells beauty care products in Ho Chi Minh City, said she usually hires models, beauty queens and beautiful bloggers to advertise her goods via both posts and live-streamed videos on Facebook.

Some popular women known as ‘hot moms’ can receive up to VND20 million per post and VND25 million ($1,101) per livestream.

The more famous one celeb is, the bigger income he or she gets from the Facebook Live ads.

Industry insiders say local celebs can rake in a few hundred million dong a month from starring in this new kind of advertising. (VND100 million = $4,400).

Some big companies have sufficiently declared and paid individual income tax on behalf of the celebs when promoting their products this way.

However, many smaller firms who have lesser-known individuals advertise their products via Facebook Live will do so without preparing adequate contracts and pay the people in cash, making it hard for tax authorities to oversee.

Tran Ngoc Tam, head of the Ho Chi Minh City tax department, said the law requires that any income that surpasses the tax-paying threshold must be declared for tax payment, and there is no exception for earnings from promoting goods via Facebook livestreams.

The local taxman will review tax declaration from businesses and compare it with the individual income tax declarations from celebrities to see if they have honestly declared their earnings.

However, tax expert Nguyen Thai Son admitted that it is not that easy if a company signs ‘verbal contracts’ with a celeb and pays him or her in cash.

In the meantime, Nguyen Huy Quang, head of the legislative department of the Ministry of Health, warns consumers against Facebook ads, especially for healthcare products.

“These products could be snake oil and it is against the law to promote healthcare products without approval from the health ministry,” Quang said.