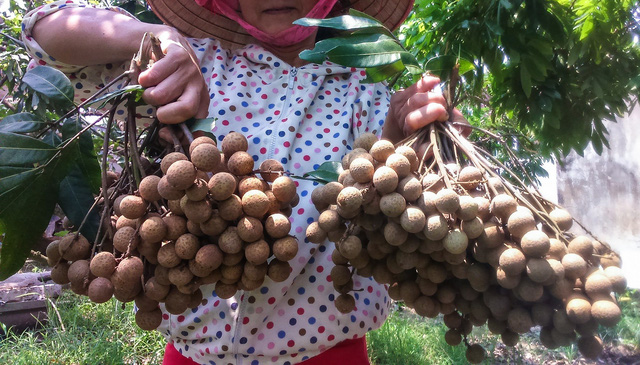 The Vietnamese longan has been assessed, evaluated, and approved for import licensing in Australia beginning in 2019, according to Vietnam’s Ministry of Industry and Trade.

Representatives from Australia’s Department of Agriculture and Water Resources visited Vietnam last month for an assessment of the cultivation procedure, cultivating area, postharvest treatment, and packaging procedure for Vietnamese longans.

After their field assessment in Ben Tre and Hung Yen Provinces, the representatives appeared optimistic that Vietnamese longans could be approved for the Australian market beginning in early 2019.

A detailed report will be published following the field assessment. Afterwards, officials from the two countries will begin discussions on the terms and conditions for importation.

Vietnamese longans are predicted to make sizeable returns despite Australia being agriculturally capable of producing the fruit, mainly due to Vietnam’s ability to provide the fruit when it is out-of-season in Australia.

The U.S., Japan, and South Korea already import Vietnamese longans and appreciate that the produce is certified as pest-free, homogeneous, safe for consumption, guaranteed quality-wise, and in-season all year round.

These factors give way to optimism that longans will become the fourth Vietnamese fruit approved for importation into Australia.

The first Vietnamese fruit approved for the Australian market was lychee in 2015, following 12 years of negotiating importation terms and conditions.

Mango followed lychee’s footsteps in 2016 to become the second Vietnamese fruit to gain approval by the Australian government after seven years of negotiation.

In 2017, Vietnamese dragon fruit was licensed for importation into the Australian market, making Vietnam the first Australian-approved dragon fruit exporter.

Longans, along with dragon fruits, are two of Vietnam’s ten most profitable exports, according to Dr. Nguyen Huu Dat, general secretary of the Vietnam Vegetables and Fruits Export Association.

Dat also suggested that more effort be exercised to ensure the quality and health safety of the Vietnamese produce should Vietnam wish to export more fruits and vegetables.

January 2018 saw an increase in produce exports from Vietnam, with US$383.7 million in returns, according to the General Department of Vietnam Customs.

This was the result of high demand from the Chinese market during the Lunar New Year.

However, predictions for a fruitful 2018 export season in other demanding markets, such as the U.S., Japan, and South Korea, are optimistic.