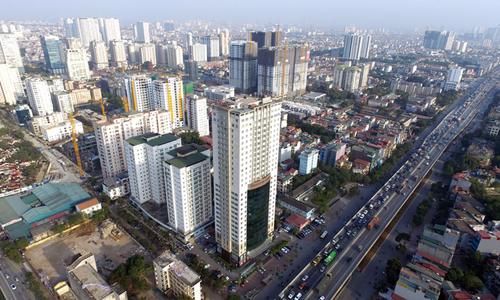 High-rise building is in fact a viable solution for Vietnam’s urban development, not a cause of traffic jams in big cities as widely thought, experts said at a conference in Hanoi on Tuesday.

While it is a common belief in Vietnam that high-rises only make the urban landscape in big cities uglier, international experts who convened at Tuesday’s international conference on landscape architecture and urban infrastructure in major Vietnamese cities have pointed out the otherwise.

The pundits from the U.S., the UK, Spain, Singapore, Hong Kong and South Korea also praised the role of high buildings, underlining that it is a requisite option for urban development in Vietnam.

Unlike in Vietnam, where tall structures are usually to blame for cramming traffic and breaking urban planning, the existence of high buildings in many countries around the world has brought about modernity and civilization to the appearance of cities there, according to the experts.

Architect Nguyen Do Dung from CPG Consultants in Singapore said that there are no countries in the world that restrict the construction of high buildings.

“They control the population density rather than the form of construction,” Dung said.

Particularly, a typical ‘vertical house,’ or multistory house built on a relatively narrow area, has an average area of 80 square meters, according to the architect.

It means 100 of such conventional houses will make up 80 percent of a one-hectare residential area.

In the meantime, Dung added, a 25-story apartment building can accommodate the same number of people as those 100 ‘vertical houses,’ while only making up ten percent of the same one-hectare residential area.

“The remaining 90 percent of urban space can be allocated for gardens, parks, parking lots and other utilities, even for road extensions,” the architect said.

Echoing this view, Dr. Huynh The Du, a lecturer at Fulbright University Vietnam, said it is those conventional houses that are the major causes of problems for Vietnam’s urban development, not the condominiums.

Nguyen Tuan Cuong, director of the Atlantic real estate trading floor, said that condominiums cannot be blamed for traffic congestion and overcrowding in major cities, adding that the real culprit is their urban designs.

“While streets in foreign cities are arranged like a chessboard, with open directions from the center areas to the suburbs, major cities in Vietnam are zoned in a bottleneck style that will only create multiple traffic congestion hotspots,” Cuong said.