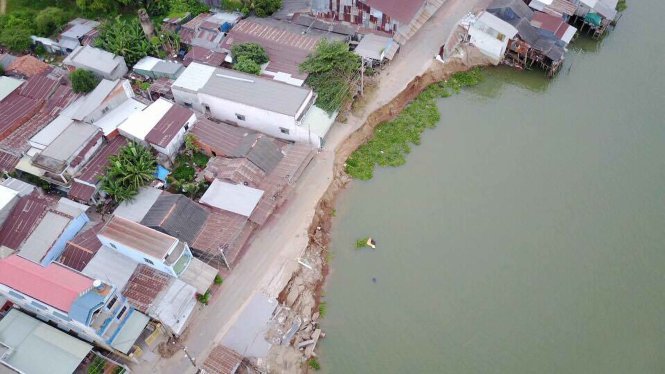 Coastal and riverine areas in Vietnam’s Mekong Delta have witnessed worryingly rapid land erosion during the past several years, owing to loss of alluvium in the Mekong River, heralding a grim scenario for the region’s livelihood.

About 25 years since 1992, the southern Vietnam’s Mekong Delta, home to over 20 million people, witnessed increasing land erosion and declining alluvial deposition, with the first occurrence evolving at a much higher rate than the second in several areas, according to Nguyen Huu Thien – an independent ecological expert.

This spelt the end of a six-millennium period in which accumulation of alluvium invariably dominated erosion in the Mekong basin of Vietnam, expanding the area continuously, Thien said.

From 2005 onwards, more than half of the region’s coastline has recorded erosion, which is also seen along local rivers, large and small, Thien said.

Up to 50 meters of coastal land was averagely worn away every year in some locations, the researcher added.

During the past two months, a series of land erosions on river banks played out in the Mekong Delta’s provinces of Tien Giang and An Giang, and Can Tho – the region’s largest and most modern city, sending multiple residents into homelessness and confusion as their house were toppled and washed away.

Vietnam’s southernmost province of Ca Mau, which faces the sea on three sides, has sustained the greatest damage from the erosion, with its coastal protective forests and embankments succumbing to destructive waves, and locals forced to evacuate.

Averagely 20-25 meters of Ca Mau’s coastal land is eaten away yearly, and around 8,900 hectares of the seashore for protected forests has disappeared during the past 11 years.

Hundreds of thousands of households in these places lost their property and experienced a threat to their lives and sources of income, which rely chiefly on farming.

Near the province’s Vam Xoay Estuary – a local infamous erosion hotspot, from which a number of residents have fled, those trying to stay are living with a constant worry.

The Mekong Delta, Vietnam’s rice and fruit basket, is currently dotted with 562 land erosion spots collectively stretching 786 kilometers along the coastline and rivers, according to an online subsidence map released by Vietnam’s agriculture ministry recently.

Amongst them, 55 locations are gravely dangerous, reaching the length of 173 kilometers.

Thien put the extensive erosion primarily down to the lack of alluvium in the Mekong system.

The insufficiency stems from hydroelectricity dams recently built upstream across the Mekong River, and the inland sand mining in countries crossed by the river, especially in Cambodia and Vietnam.