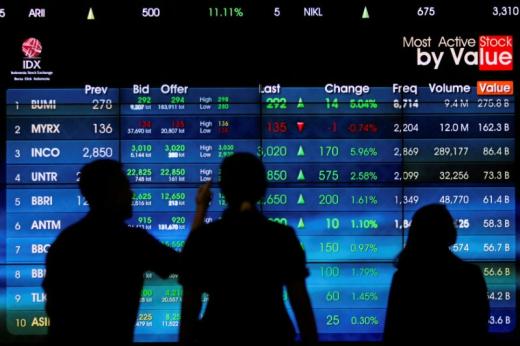 China's economic growth cooled slightly to 6.4 percent in the fourth quarter from a year earlier, weighed down by weak investment, faltering consumer confidence and the trade war with the United States, leaving 2018 growth at 6.6 percent, the weakest since 1990.

Chinese policymakers have pledged more support to the economy this year with the government expected to unveil more fiscal stimulus measures during the annual parliament meeting in March.

"Markets had expected the slowing economic growth, I think focus is shifted to stimulus measures that China has announced over the past few weeks," said Joel Ng, an analyst with KGI Securities.

Meanwhile, U.S. President Donald Trump said on Saturday there had been progress toward a trade deal with China, but denied that he was considering lifting tariffs.

Vietnam stocks led gains in Southeast Asia with a rise of 1 percent. Financial and real estate stocks were among the top contributors with both CMC Corp and Ninh Van Bay Travel Real Estate JSC rising 7 percent.

Thai shares rose 0.3 percent after data showed higher exports for 2018 and due to a surge in oil prices.

While customs-cleared exports unexpectedly dropped in December, an 8.15 percent decline in imports resulted in a trade surplus of $1.06 billion, compared to expectations of $1.1 billion deficit.

Meanwhile, crude prices rose to their highest in 2019 after data showed refinery processing in China climbed to a record last year despite a slowing economy.

Energy stocks PTT PCL and PTT Exploration and Production PCL were among the top boosts, rising 1 percent and 1.6 percent, respectively.

The city-state's consumer price index probably rose 0.4 percent last month from a year earlier, according to a Reuters poll.

Malaysian markets were closed for a holiday.