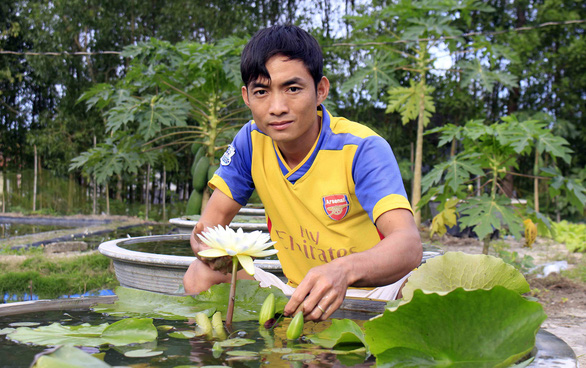 A man in central Vietnam has established himself as a successful grower of water lilies after being undeterred by multiple failures in aquatic plant cultivation.

In his hometown in Thua Thien-Hue Province, Huynh Van Khanh now owns a farm of over a thousand water lilies, a flower usually used as ornamental plants across Vietnam.

The 30-year-old man’s achievement is attributable to his determination to become rich by growing water lilies.

Khanh refused to follow in his parents’ footsteps as a fisherman and resolved to cultivate the plants.

The man who has never attended college encountered a number of demises in the business, of which his mother disapproved and several neighbors spoke ill.

“I believed the failures to be inevitable and I told myself to strive with the best of my youth,” he said.

But this does not mean he was never discouraged by criticisms. In fact, Khanh once left the job of taking care of water lilies behind and came to Dak Lak, a Central Highlands province about 600 kilometers away from his hometown, to work as a well digger.

The man managed to save VND10 million (US$430) from the labor, and eventually decided to spend it on water lily farming, yet again.

He thus left Dak Lak, carrying the money back home and building a larger farm where he himself grew water lilies of rare species.

He knocked the doors of potential buyers’ homes in Thua Thien-Hue and a nearby area to tout his aquatic flowers, sold by the pot for VND30,000 ($1.3) apiece.

As his business thrived, he put more money into expanding the farm, which has given him a monthly profit of over VND50 million ($2,150) and created employment for a few local residents.

The 1.2-plus-hectare farm, around the size of two football pitches, now has more than 100 species of water lilies in various colors native to different countries.

Amongst them are Australian water lilies that can change their color, which cost Khanh a large sum of initial investment.

Nguyen Thi Lanh, a 64-year-old next-door neighbor who once saw Khanh’s plants wither, said she could understand how difficult his cultivation of the plants was and how perseverant he seemed in pursuing the water lily success.