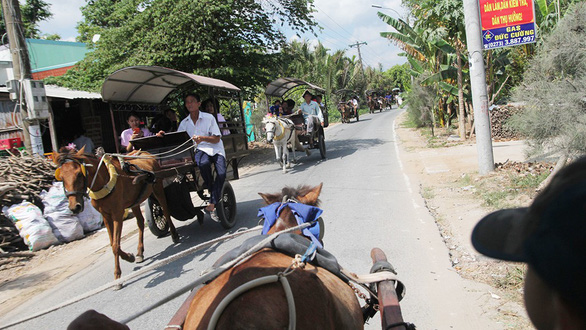 Despite being well known for its waterway landscape and the greenery of numerous paddy fields and verdant orchards, tourism in Vietnam’s Mekong Delta remains underdeveloped, with experts pointing the finger at the lack of a well-planned strategy for tourism development in the region.

The Mekong Delta consists of Can Tho City and 12 other provinces.

There are currently not many things to do in the region, dubbed Vietnam’s granary.

Visitors will normally be taken to fruit tree plantations and traditional craft villages for sight-seeing, tasting local delicacies and spending the night at homestay services there.

This is why tourist numbers in the region are quite modest, according to respective reports made by the Mekong Delta localities.

For instance, Tien Giang Province received only two million tourists, both domestic and international, in 2018, while the respective figures of Ben Tre and Dong Thap Provinces were 1.6 million and 3.6 million visitors. The Mekong Delta hub of Can Tho served some 8.4 million visitors last year.

To put this into perspective, the number of international visitors to Ho Chi Minh City alone was more than seven million in 2018.

Le Van Thanh, owner of a mango orchard in Cao Lanh, the capital of Dong Thap, told Tuoi Tre (Youth) newspaper that he has decided to temporarily stop welcoming visitors to his garden as the service had only brought in losses.

“The lack of customers has created a huge financial pressure for me when it comes to paying wages for my staff,” he said.

Thanh said he has temporarily closed his orchard to visitors, until “some enterprises come and develop a large-scale tourism resort here.”

Likewise, Truong Thi Dinh, owner of a homestay in Dong Thap’s Lap Vo District, told Tuoi Tre that her accommodation has welcomed only two groups of holidaymakers in the past year.

“Both groups looked enjoying their time here, but as there were no other visitors after them, it is obvious that they did not recommend their trips to anyone,” said Dinh.

“The tour operators did not come back, either.”

Roots of the problem

Dinh admitted that there is a lack of connection between her place and nearby attractions including a traditional mat-weaving village, a sedge mat market and the village hall, leading to a lackluster tourism appeal.

Such loose connection between tourism service providers in one locality can be found in other places across the Mekong Delta, but it is only one of the major causes for the region’s underdeveloped tourism.

According to Phan Van Thong, director of the Con Phung tourist resort in Ben Tre Province, homestay service is mushrooming in the locale, while their operators cannot ensure their quality.

Speaking at a recent tourism meeting in Ben Tre, Phan Van Mai, standing deputy secretary of the provincial Party Committee, said that many local tourism accommodations also provide other services such as coffee shops and drinking places which spoil the peace of hotel rooms.

“We complained about homestays being affected by noise from neighboring drinking places, but now even the homestay owners arrange for guests to throw drinking parties at their places,” Mai said.

Vo Tien Thanh, director of Dong Thap Tourism Development Center, said many local administrators tried to promote their localities as a tourism hotspot under pressure from higher authorities that they have to do something to boost local tourism development.

“The fact is that their tourism resources are limited,” Thanh said.

He added that locals also want to ‘do tourism,’ but they lack all the necessary knowledge and skills to be service providers.

“They are lacking in marketing and management skills and have no idea whom they will serve or how to establish connections with tourism operators.”

Thanh thus called on authorities to have a detailed plan for tourism development in the Mekong Delta, while suggesting that people involved in the sector increase their service quality.

According to Mai, the Party official in Ben Tre, tourism business owners should clearly determine their business model and target customers to have appropriate investment from the beginning, before thinking of making a difference from their competitors.

“Visitors do not come to Mekong Delta provinces just to see a pond of lotus flowers, or to have a countryside-style meal, but they also expect to experience friendliness and hospitality from local people,” Hoan said.