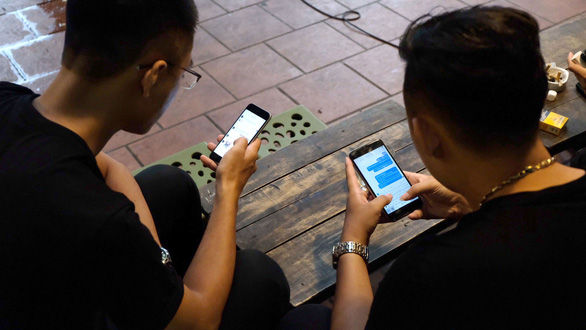 Vietnam’s mobile network operators are doing their best to cope with a surge in the amount of data consumed by a growing population of Vietnamese users who spend their time watching videos, sharing photos, and watching live streams online.

Vietnamese users are demanding that mobile network operators upgrade their infrastructure to cope with the massive amounts of internet data they now consume, according to a report published by We Are Social, a social network that provides and facilitates social thinking and collaboration.

During the recent holiday to celebrate Reunification Day (April 30) and International Workers’ Day (May 1), mobile carriers in Vietnam struggled to provide enough mobile data to keep their networks operating at acceptable speeds.

According to Vietnam’s military-run telecommunication company Viettel, the rising number of users accessing the internet on smartphones has caused a spike in the need for mobile data, especially as sharing photos, watching videos, and live streaming become more entrenched in users’ habits.

The total data usage during the holidays reached a record high of 600GB per hour, Viettel said.

Of course, that adds up to a massive amount of mobile data consumption.

Similarly, data-consuming internet services are also preferred by Vietnamese users. According to the same report, 96 percent of Vietnamese internet users use YouTube and 79 percent use Messenger. These, along with Facebook, Instagram and Zalo, make up the top five most-used Internet services in Vietnam.

In addition to the most recent trend of live streaming, these platforms are believed to be the main reason for the surge in mobile Internet data demand in the Southeast Asian nation.

Fewer people are buying 2G and 3G data plans, as Vietnamese users now prefer the newer, faster 4G connection, which is expected to grow tremendously until 2023 and reach its peak in 2024, according to the most recent forecast of the Authority of Radio Frequency Management under the Ministry of Information and Communications.

The total number of mobile phone users in Vietnam reached 57.6 million in March 2019, 11.9 million higher than in 2018, according to the Ministry of Information and Communication, making it apparent that telecommunications is a fast growing industry of Vietnam.

Not only has the number of users increased, the quality of wireless internet connections has also improved significantly, according to We Are Social report.

In 2017, the connection was only at 3.4Mbps when the speed of cable internet was measured at 6.3Mbps. In 2019, the speed of wireless internet was raised six-fold to 21.5Mbps while the cable speed reached 27.1Mbps.

For the five-day holiday at the end of April, the country’s largest telecommunication company had to add another 60 new broadcasting stations, 200 antennas, and install 50 new Wi-fi hotspots in crowded areas and locations with major events and festivals.

In addition, Viettel is also planning to add another 10,000 broadcasting stations for 4G data plans on a 2100MHz channel that was recently approved for 15 biggest municipalities in Vietnam including Ho Chi Minh City, Hanoi, Da Nang, and Hai Phong.

Another telecommunication company that also intends to improve its infrastructure is state-run telecom giant VNPT, which has plans to add more 3G and 4G mobile stations and improve its current configurations in order to guarantee the quality of its service.

Mobifone, a state telecom company, also claimed to have installed another 4,500 4G stations in the first quarter of 2019.