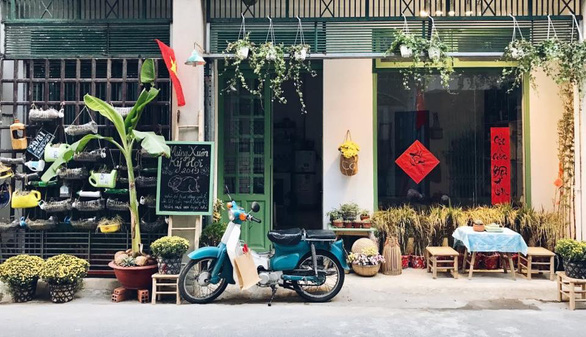 Vo Thi Phi Yen knew that it was time to make a difference when her mother began having serious health issues caused by the pesticides used by her family to grow vegetables.

After moving her mother from their hometown in the central province of Quang Nam to Ho Chi Minh City for special treatment, Yen was instructed only to feed her mother organic food.

It took only a few days before she realized just how expensive clean eating can be.

As food bills began stacking up, Yen, an economics major who has spent the past few years working a well-paid job in Ho Chi Minh City, started to research natural planting methods she could use to produce her own organic food and vegetables.

Eventually she found “Vuon Co Ha” (Ha’s Garden) – a small farm in the outskirts of Ho Chi Minh City where she would be able to grow her own vegetables and pursue her passion.

This led to the founding of Co Eco Home, a small shop in Ho Chi Minh City which manufactures organic goods in order to provide customers with high quality and environmentally friendly Vietnamese products such as spices, fruits, vegetables, and dried foods.

“We are confident in our products and hope to give customers the quality they deserve,” Phi Yen explained.

To ensure that future generations wouldn’t have to deal with the same issues her mother has, Yen took it upon herself to begin promoting chemical-free agriculture methods to neighboring farmers in her hometown.

She now spends her time talking with farmers and convincing them to follow her growing methods, which contributed a great part in her “clean food supply” strategy.

“I promised to buy their products at higher-than-market prices if they agreed to follow my instructions,” Yen shared.

Yen’s biggest concern, however, is her own father, who she says doesn’t have much faith in her endeavor and is still conservative in the way he farms.

However, she hasn’t let that stop her from moving forward and proving through the success of Co Eco Home and.

“Patience and determination define the key to success, so I won’t give up easily,” said the 29-year-old.