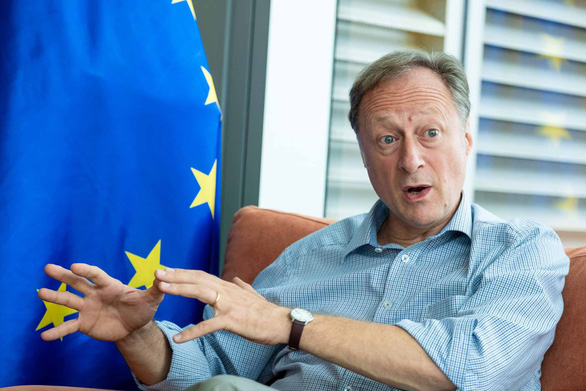 Strong commitment from the Vietnamese government played a crucial role in efforts to persuade skeptics in the European Union (EU), leading to the signing of a landmark bilateral free trade pact with Vietnam last week, according to Bruno Angelet, head of the Delegation of the EU to the Southeast Asian country.

The deals are expected to pave the way for tariff reductions on 99 percent of goods passed between the EU and Vietnam, although they still need to be ratified by the European Parliament, Vietnam’s lawmaking National Assembly, and EU member states before coming into force.

This is the first time the EU has signed such a free trade agreement with a developing country and, according to Ambassador Angelet, there have been significant efforts from pro-EVFTA negotiators at the EU to convince the organization’s 28 member states.

In an exclusive interview with Tuoi Tre News in Hanoi on Tuesday, Ambassador Angelet described obstacles to striking the trade accord and what Vietnam and the EU have in common in World Trade Organization (WTO) reform.

There are many differences between Vietnam and the EU. How can we overcome the differences to reach such agreements?

I would say, overall, that I think there are a lot of common views between Vietnam and the EU when it comes to defending the international rule of law, promoting sustainable development, fighting against the abuse of power, and our agendas in the United Nations. We don’t see things similarly in all areas. We have different views, of course, but we respect the differences.

Vietnam is very much exposed to climate change, but Vietnam considers that it will need to take more time to develop its economy before it can make the same efforts as us. We are basically trying to help. So, overall, we get along very well. We have strong common views on the way trade should be organized and that the WTO has to be reformed. Both Vietnam and the EU are very much concerned by the trade disputes that are taking place between the United States and China. We also have a common view on how the future of trade looks.

Can you give more details on what Vietnam and the EU have in common in terms of reforming the WTO?

I think that the EU and Vietnam both want dispute settlement to be well-organized within the WTO so that each member state has equal access to dispute settlement mechanisms. In the past, we accepted the principle of ISDS (Investor-State Dispute Settlement). The story is that when a foreign investor has a dispute with the state, it can go to extra territorial courts or arbitration systems to fix the dispute. We will try to find a better mechanism. Vietnam was the first country to accept the so-called investment court system (ICS).

When the EVFTA and IPA come into force, investment disputes will be settled by ICS mechanisms. The benefit of the ICS is that we won’t have to work anymore with private lawyers as judges, but we can appoint professional and career judges to a pool of nine judges - three from Europe, three from Vietnam, and three international judges. This is better than what we’ve done in the past.

The negotiation process took a long time and were hindered by many difficulties. Can you share more about those obstacles?

We can’t say everything is fine. Four years ago both EU and Vietnamese leaders agreed on how to create an enabling environment and send strong signals to ensure a green light to sign the Joint EU-Vietnam statement of December 2015. If you don’t know the EVFTA, you don’t know the process behind it. It was a very broad process. I only have two hands and two legs and we are working with maybe 200 or 300 people on the process so we have to use everything we had. Over last month it was 24 hours a day, seven days a week. We were working very hard.

In October 2015, we asked the European Trade Policy and Investment Support Project (MUTRAP) to make a report for the government and the EU. So they made a report that was so long it weighed seven kilograms! They mapped out all the areas, from legislation to regulations.

In December 2015, we decided that we would need to see how Vietnam would prepare for the EVFTA. As I’ve said, in the past we signed a treaty but we couldn’t use it and businesses couldn’t use it.

So, how did you convince the EU?

There are people saying, “This is too ambitious, Vietnam khong lam duoc, qua tham vong – Vietnam cannot do it, [they're] too ambitious." And we don’t say everything is okay. But we always say that “we are sure, we will work with the Vietnamese government, we will show you before, not after we sign [the deal]." And even when the Vietnamese National Assembly showed their commitment by changing the labor code in November 2018, we still had to see how it would be implemented. We would like to see the action plan so that we can use it to convince those who said Vietnam “khong lam duoc, qua tham vong." Again, the most important thing is the commitment from the Vietnamese government.

What are Vietnam's characteristics that appeal to EVFTA proponents in the EU, making them fight so hard for the agreement?

Vietnam has the most open economy and most foreign investment (FDI) per capita in Southeast Asia. In Vietnam, Europe is only the fifth-largest investor, so we hope to boost it. But I think that if we combine the different advances of Vietnam, we will see that the demographics are very suitable, as well as the population size in general. Moreover, Vietnam has strong economic growth, an improving business environment, and integration. Vietnam is a country with lots of FTAs. If excluding the service sector, Vietnam has even more FTAs than Singapore and is the most significant exporter to the EU from Southeast Asia.

Is the EU concerned that most Vietnamese companies are small and medium-sized, meaning they might not benefit from the EVFTA? Does the EU have any plans to educate or support Vietnamese and European businesses?

We understand this point. We think there are major efforts from your government. From the EU, we have also planned out several technical assistance programs for Vietnam to ensure small and medium enterprises can also reap the EVFTA benefits. For instance, we have a technical assistance program for the agricultural sector, as well as technical exchanges with government and ministries on quality management, public communication, and awareness raising for the EVFTA. This process will take more time.

We have also pushed the big companies first, and sometimes it takes several years for the smaller ones to notice such opportunities.