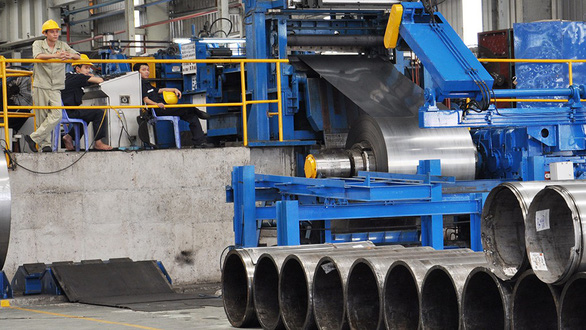 US duties against steel imports from Vietnam a 'common practice': expert

The U.S. having recently announced plans to slap tariffs on steel imports from Vietnam originally produced in South Korea and Taiwan is not a warning for trading misconduct, an expert told Tuoi Tre News on Thursday.

The U.S. Department of Commerce said on Tuesday that it would impose tariffs of up to 456.23 percent on certain steel produced in South Korea or Taiwan which is shipped to Vietnam for minor processing before export to the States.

Customs officials have been ordered to collect cash deposits at rates as high as 456.23 percent on imports of steel products produced in Vietnam using materials from South Korea and Taiwan, according to Professor Julien Chaisse of the City University of Hong Kong School of Law.

Cash deposits are not a final assessment of duties, but are collected at the time of importation as a form of security until customs officials are able to complete their investigation into each product’s origin.

Each year, companies are given an opportunity to request an annual review by the U.S. Department of Commerce of the rates calculated during its initial investigation.

Upon completion of those reviews, the U.S. Department of Commerce calculates and assesses final duties for past entries, and the cash deposits going forward are adjusted to reflect those new rates, Chaisse told Tuoi Tre News in an email.

The department said certain products produced in South Korea and Taiwan were shipped to Vietnam for minor processing before being exported to the U.S. as corrosion-resistant and cold-rolled steel.

The professor added that the commerce agency believes some South Korean and Taiwanese companies are trying to route products through Vietnam to dodge higher U.S. duties.

Against this context, the preliminary circumvention rulings from the U.S. are just “normal and common practices,” Chaisse underlined.

“I also feel the U.S. reaction is normal,” he added.

However, Chaisse did not deny that the U.S. is hardening its rhetoric against Vietnam, one of its major trading partners, due to the Southeast Asian country benefiting from President Donald Trump’s trade war with China.

The professor also acknowledged Vietnam’s ongoing efforts to reduce its trade surplus with the U.S. and the country’s determination to crack down on Chinese manufacturers who are rerouting their goods via Vietnam for export to the U.S. in order to bypass higher tariffs.

In a relevant event, the Vietnamese government has recommended that businesses use raw materials from domestic sources as well as other suitable alternatives to avoid legal challenges related to the problem.

“The Ministry of Industry and Trade has warned local companies about possible moves by importing countries, including the United States, to apply stricter requirements in trade protection cases,” Le Thi Thu Hang, a spokesperson for the Vietnamese foreign ministry, said at a press meeting on Thursday.

During the briefing in Hanoi, Hang said Vietnamese companies should consider business strategies that include switching to domestic materials.

She added that Vietnam will continue to work with the United States in its efforts to clamp down on goods of foreign origin illegally relabeled “Made in Vietnam” by exporters seeking to circumvent tariffs.