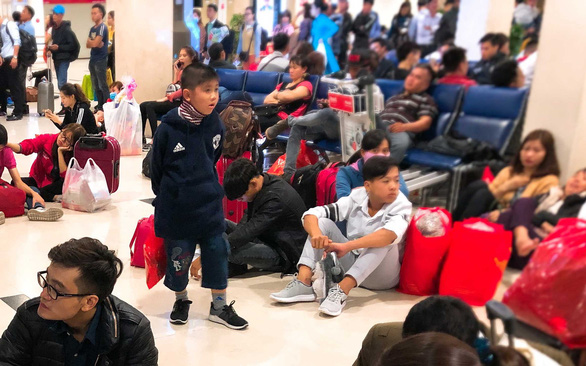 Air travelers in Vietnam are suffering from scant and expensive services provided by only five domestic carriers, a very modest number of airlines given the huge demand for flying in the Southeast Asian country.

The peak seasons of air travel in Vietnam are the Lunar New Year (Tet) holiday, which falls around January and February, and the summer break.

But even those who are willing to pay will not be able to purchase a ticket, as flights to such domestic airports as Cat Bi in the northern city of Hai Phong, Dong Hoi in the north-central province of Quang Binh, and Con Dao Island off the southern province of Ba Ria-Vung Tau are often sold out.

A total of 68 foreign airlines from 25 countries and territories are present in Vietnam, according the Vietnam News Agency.

But there are only five domestic carriers, namely Vietnam Airlines and its subsidiary Vasco, Vietjet, Jetstar Pacific and Bamboo Airways.

The Southeast Asian country is expected to receive more than 112 million passengers through its airports in 2019, eight million people more than the previous year, according to the Airports Corporation of Vietnam (ACV).

Vietnam’s aviation sector grew by 29 percent over the last five years, much higher than other countries such as China (10-15 percent), Thailand (11.1 percent), and South Korea (10.4 percent).

But experts are concerned that the five domestic carriers will fail to meet such a huge demand.

Passengers will take the consequences as this supply and demand mismatch has resulted in higher airfares.

The problem can only be solved by increasing the number of airlines and improving aviation infrastructure, according to industry insiders.

Vietnam currently has 22 airports, capable of serving a combined 75 million passengers a year, paling in scale with the serving capacity of 100 million travelers per year of any single major airport in Thailand, Singapore, and Malaysia.

Vietnam’s busiest international airports, Tan Son Nhat in Ho Chi Minh City and Noi Bai in Hanoi, have already become overloaded, and it remains to be seen when the country’s aviation infrastructure will be improved to be on par with the rising demand for air travel.