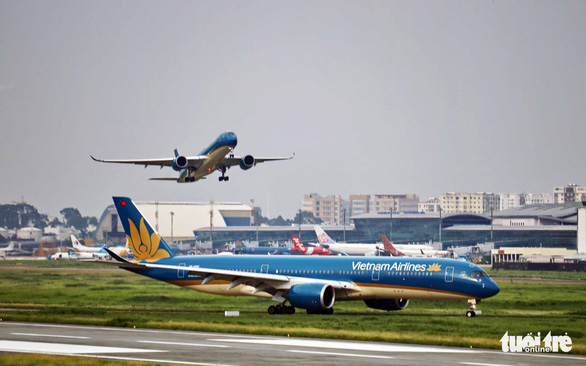 Binh, who is also chairman of a national committee responsible for civil aviation security, made the statement at a meeting of the committee in Hanoi, Giao Thong (Traffic) newspaper, run by the Ministry of Transport, reported the same day.

“Pilots trained by the state are a national resource, so it is not sensible to have airlines vie for domestic pilots,” Binh was quoted as saying at the meeting.

He added Vietnamese airlines should not exaggerate their capabilities as an advertising tactic to attract pilots, and must not overwork their pilots to improve turnaround time.

Foreign pilots of up to 50 different nationalities currently make up a large percentage of Vietnamese carriers’ aircrews.

This “has the potential for bringing about difficulties in monitoring and standardizing” Vietnam’s aviation industry, the deputy PM asserted.

Vietnam’s aviation industry reported a 8.4-percent growth in number of flights operated in the first seven months of 2019 compared to the same period of last year, according to the deputy premier.

Twenty-nine planes were added to Vietnamese airlines’ fleets and one new airline - Bamboo Airways owned by real estate conglomerate FLC Group - took off for the first time during the period, Binh added.

The country’s only pilot training academy, the Vietnam Airlines-run Viet Flight Training, churns out about 100 new pilots every year while the country is forecast to need about 200 new pilots per year from now until 2030, according to the Civil Aviation Authority of Vietnam (CAAV).

Roughly 800 out of 1,200 certified Vietnamese pilots at work are Vietnam Airlines-trained.

The national flag carrier has alleged industry rookie Bamboo Airways of employing unfair tactics to recruit its pilots, causing the airline substantial losses, according to a letter sent to the Ministry of Transport in April.

In response, Bamboo Airways’ parent company FLC Group said the accusations were “completely groundless” and that it was making recruitments in pursuant with laws in Vietnam.

“It takes a lot of time and money to train pilots and aviation technicians,” a Vietnam Airlines leader was quoted by local news website VnExpress as saying.

“We cannot rest assured and continue with our long-term investments when faced with such market instability and turmoil,” the Vietnam Airlines leader said.

Faced with an unprecedented pilot shortage due to soaring air travel, Vietnamese airlines are turning to training their own pilots.

Vietnamese conglomerate Vingroup announced in July it was working with the CAE Oxford Aviation Academy to establish the VinAviation School and Vinpearl Air Training Centre in Vietnam.

The VinAviation School is designed to train pilots and aviation technicians, while the Vinpearl Air Training Centre will offer training for regular level upgrade of pilots, machinists, flight operators, and flight attendants, among others.

Enrollment for VinAviation School began on Friday with Vinpearl Air -  a Hanoi-based arm of Vingroup operating in the aviation sector - looking to enrol 400 learners aged 18-35 for its first pilot class.

Meanwhile, Bamboo Airways said in June the airline was conducting studies to open one aircrew training school each in Quy Nhon, the capital city of the south-central province of Binh Dinh, and the northern province of Quang Ninh.

The hybrid airline commenced construction of its Aviation Training Institute in Binh Dinh in late July, and was on Tuesday this week granted an Approved Training Organisation (ATO) certificate by the CAAV, allowing it to train aviation staff including flight attendants and technicians.

“We expect to have our own human resources in the next one or two years,” a Bamboo Airways leader has told Tuoi Tre (Youth) newspaper.

Meanwhile, Vietjet is already one step ahead with its own training center, which complies with the Airbus and European Aviation Safety Agency’s standards, opened under its cooperation with Airbus in Ho Chi Minh City in 2018.

Vietnamese airlines conducted over 153,000 flights in the first half of 2019, a 2.4-percent growth year on year, according to a CAAV report.

More than 15 percent of these flights were delayed or canceled, CAAV said.