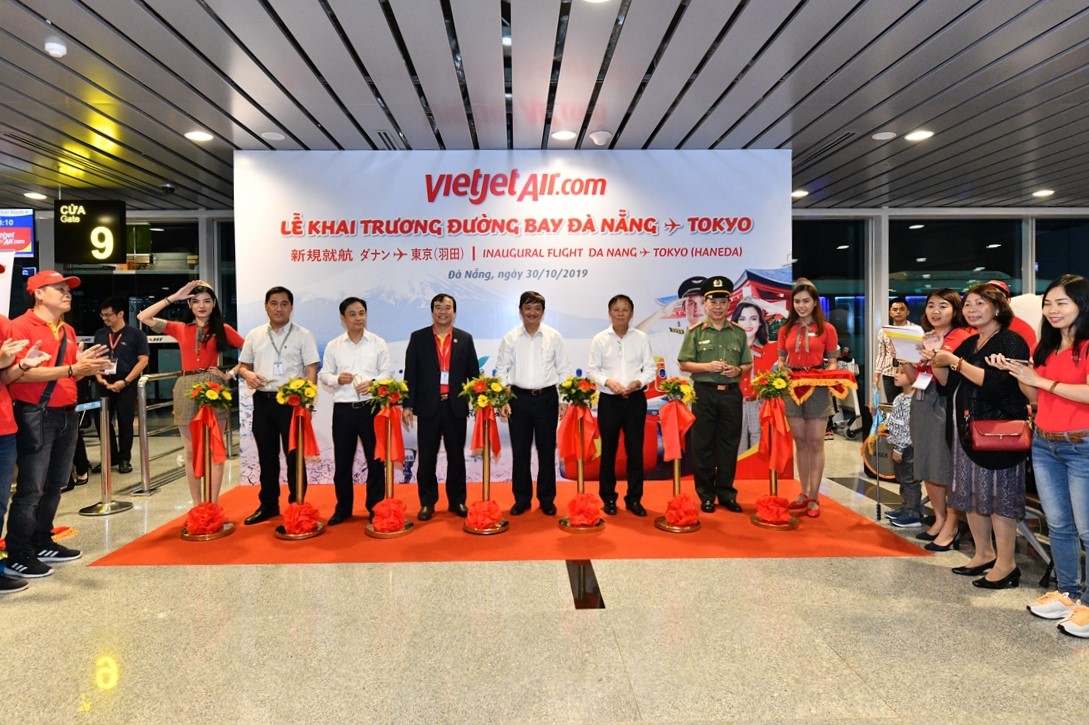 This is the first direct service between Da Nang and Haneda, which is considered the busiest airport in all of Japan, and one of Asia’s most bustling ones, Vietjet said in a press release on Thursday.

Located less than 30 minutes from downtown Tokyo, the airport is highly convenient for business people and leisure travelers flying into the Japanese capital.

It is also one of the region’s biggest transit hubs between Asian countries and Western nations with a significant network of both domestic and international flights.

At the inaugural ceremony on Wednesday, leaders of Da Nang City and Vietjet presented flowers and souvenirs to the flight crew and the first passengers boarding for Tokyo as well as the first passengers arriving at Da Nang International Airport on the two debut flights.

To celebrate the launch of the new route, Vietjet also staged a dance and instrumental folk performance that showcased Vietnamese culture.

With a flight duration of approximately five hours and thirty minutes per leg, the flight departs Da Nang at 6:10 pm and lands in Tokyo at 1:00 am, while the return flight takes off from Tokyo at 2:30 am and arrives in Da Nang at 6:40 am.

Of the four other direct routes between Vietnam and Japan, Vietjet has linked Ho Chi Minh City and Hanoi to both Tokyo (Narita) and Osaka.

“We are proud to provide a new travel option which is affordable, convenient and suitable for travelers wishing to depart from Haneda Airport, which is close to central Tokyo, and travel to Da Nang – one of the world’s most adored beach cities,” Vietjet vice-president Nguyen Duc Thinh said at the launch ceremony.

“Together with our four other routes between these two countries, and the expansive domestic and international networks we offer, the new service will further complete Vietjet’s growing connections between Vietnam and Japan.

“The new route will help travelers from Japan easily discover phenomenal destinations in central Vietnam such as Da Nang, the ancient town of Hoi An, the former imperial citadel in Hue, Quang Binh, and many more wonderful places in Vietnam and across the Asian region.

“In return, travelers and local people in central Vietnam can now fly directly to Japan and other destinations throughout the world via Haneda without having to travel to other big cities as in the past.”

Tickets for the new route are available on all channels including the airline’s website, the Vietjet Air mobile app, and its Page on Facebook.

Passengers can also hunt for VND0 tickets with the airline’s on-going promotion, ‘Ohayo Saturday, Fly to Japan from only VND0,’ which runs every Saturday from now until March 31 on the carrier’s website and applies to all five routes to Japan.

The flight time for the promotion is at least 30 days after booking dates.