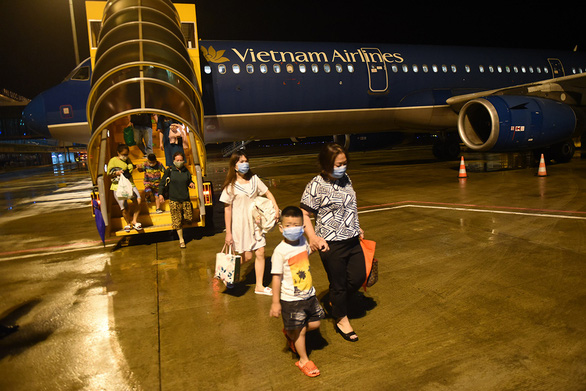 Domestic airlines are adding more late-night flights to their schedule to respond to the spike in travel demand during the Lunar New Year holiday season.

Air carriers have mobilized their full capacity to keep up with the surge of customer demands during the holiday season, with more departures added during the late hours as well as early mornings from 1:00 am to 5:00 am, said the firms’ representatives.

Although the Lunar New Year holiday is less than a month away, flight tickets are still abundantly in stock.

In the meantime, airlines are adding more flight trips to their holiday schedule, which is accompanied by an array of promotional campaigns.

From the customers’ viewpoint, the ticket pricing for this year’s holiday season has been much more volatile than the past years’, with tickets still largely available for the peak period between February 8-12 and February 15-19.

Domestic airlines list around 30-35 trips per day for the Ho Chi Minh City – Hanoi route, with Vietjet providing the cheapest fares from VND2.1-2.8 million (US$90-121) per passenger, while Vietnam Airlines offers the highest price range at VND3.5-4.6 million ($151-198) per ticket.

During the peak days from February 6 to 12, up to five flights during late hours are scheduled, while more flights departing as late as 11:30 pm and as early as 5:00 am are also listed.

Pham Thi Ty, a resident in Ho Chi Minh City’s Binh Thanh District, saved VND2 million ($86) by purchasing four flight tickets that depart at the odd hours of 4:30 am instead of the conventional daytime.

According to Ty, it would cost her VND9.2 million ($400) for four tickets to Da Nang City from Ho Chi Minh City had she chosen to depart in the regular hours.

“It’s the Lunar New Year after all, [I can] wake up earlier for the 4:30 am flight in order to land at Da Nang at 6:00 am. The crowd at the check-in counter would be less intense at that hour. Once I reach the arrival airport, I can board a bus and go straight back home,” Ty said.

According to Nguyen Quang Trung, head of planning and development at Vietnam Airlines, the number of late-night flights for the 2021 Lunar New Year has increased 30 percent compared to last year, with the majority being scheduled during peak days.

As part of the plan to focus on the domestic market, the boost in late-night flights will also help to mitigate the burden for the air operator as well as airports during the holiday rush, while offering choices of reasonable price to customers.

According to Trung, ticket price for the 2021 Lunar New Year has dropped 10 percent compared to the previous holiday season, while Vietnam Airlines has not kept on offering new options to customers with new economy ticket class and promotion programs.

The challenge, however, is the lack of time slots and the unwelcoming position of airports when it comes to late-night service.

“The operational cost for the terminals, utilities and staff is extremely high during the late hours. For that reason, more late-night flights would not prove worthwhile for some airports with low traffic,’ the representative explained.

According to a leader of the Airports Corporation of Vietnam, 21 domestic airports were required to assume the position for the peak holiday season, which involves ensuring service quality and safety measures.

So far, Vietnam Airlines Group, a consortium of Vietnam Airlines, Pacific Airlines and VASCO, has announced over 2,100 added flights on the Lunar New Year schedule, which brings the total number of seats offered for the peak holiday season to more than 2.4 million.

​Vietnam’s shadow economy is bigger than you think

Over half of Vietnam’s workforce is involved in a shadow economy, a study has shown