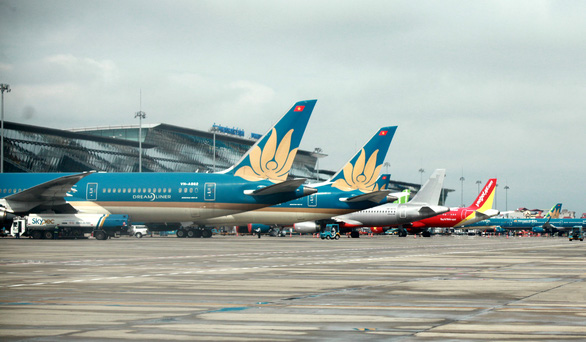 Many airlines in Vietnam have announced their resumption of domestic passenger flight routes starting Thursday, following the permission of the transport authorities as the COVID-19 pandemic is subsiding nationwide.

Vietnam Airlines Group, including Vietnam Airlines, Pacific Airlines, and VASCO, has restored nearly all its domestic routes for passengers, with some 40 flights scheduled for October 21 to 30, a representative of the group has said.

The number of restored routes is equivalent to that operated by the group before the pandemic’s latest wave, which hit the country in late April.

The group expects to launch more than 90 passenger flights per day from Thursday and raise the number to some 120 from the end of October.

Bamboo Airways has also announced the reopening of all its local routes, with 17 return services between Hanoi and other localities and 15 others linking Ho Chi Minh City with other destinations.

The airline will additionally launch other flights for passengers from and to Da Nang without involving Hanoi and Ho Chi Minh City.

Vietjet, a low-cost carrier, also announced the restoration of all flights on Thursday connecting Ho Chi Minh City with Hanoi, Da Nang, and other provinces and cities.

The carrier said it will open 48 routes to serve passengers by October 30.

Notably, Vietjet has restarted its zero-dong ticket sales program, especially for workers returning to Ho Chi Minh City and other southern provinces after they previously left the virus-hit localities for their hometowns.

The carrier will also provide free COVID-19 tests for all passengers departing from Ho Chi Minh City from Thursday and from Hanoi since Friday.

Such domestic flight resumption came as the country has basically put the pandemic at bay, with new infections and deaths falling significantly, especially in epidemic epicenters including Ho Chi Minh City.

Since the pandemic emerged in Vietnam in early 2020, the city has suffered most with 418,049 COVID-19 cases, including 16,330 deaths, the Ministry of Health reported on Wednesday.

However, the city’s daily COVID-19 infection number has recently reduced sharply, to 1,347 on Wednesday from 5,171 a month earlier.

Its daily fatalities plummeted to 43 on Wednesday from 163 on September 20.

Nationwide, 873,901 cases, including 796,583 recoveries and 21,416 deaths, have been registered in 62 out of the country’s 63 cities and provinces, except Cao Bang, where measures to prevent virus penetration have strictly been applied.