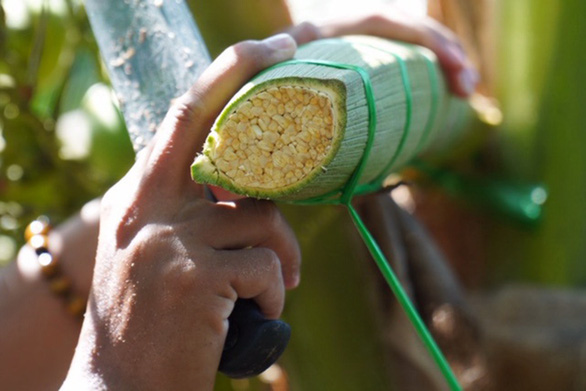 When one hears about coconut flower syrup, or coconut nectar, for the first time, they may think about something like honey, but it is different.

Coconut nectaris the first of its kind to be produced in Vietnam by a young couple.

At the Vietnam Festival 2021, which was held in Japan in early December, there was a special kiosk making many customers very curious.

It offered a specialty product named coconut nectar, which was unknown and exciting to many attendees.

Once used as a kind of natural sugar by the ethnic community of Khmer in the Mekong Delta province of Tra Vinh, coconut nectar did not become a commodity because of limited demand, and it was gradually forgotten over time when the Khmer stopped using it.

Nearly three years ago, there was a young couple who decided to leave Ho Chi Minh City for Tra Vinh to build their career.

The wife, Thach Thi Chal Thy, has a master’s degree in food technology, and her husband, Pham Dinh Ngai, is an electrical engineer.

They launched an enterprise whose name reflects their dream: Sokfarm, which means 'happy farm”' in Khmer, Thy’s mother language.

To date, Sokfarm has been the only company producing coconut flower syrup and other byproducts in Vietnam.

It was never easy as it took Ngai and Thy around six months to be able to extract coconut nectar using the Khmer’s traditional skills in the beginning.

Then they managed to perfect the technique of vacuum concentration at 55 degrees Celsius. While Thy tried to figure out a way to concentrate the nectar, Ngai helped her design machines to realize her desired products from coconut flower syrup.

“We are lucky thanks to the coconut genie’s help,” Ngai said, laughing.

The family company has employed 25 full-time workers since its launch in June 2019. Each of the employees can earn a monthly salary of VND6 - 9 million (US$265-397), which is rather high by local standards.

Sokfarm buys coconut flower syrup from many other local farmers as well. The income from selling syrup is about 3-5 times higher than selling coconuts, according to Ngai.

For the couple, one of their greatest achievements is that 90 percent of their workers are Khmer.

“I feel that coconut syrup exploitation is suitable for our farmers, who follow Buddhism and consider it enough to be happy,” said Ngai.

“Our employees work with coconut trees every day, regarding them as their friends, to whom they can show their happiness, sadness, and anger.

"It is hard to believe that the trees do yield more nectar when our farmers enjoy their work."

Being proud of Vietnamese agricultural products

Based in a Mekong Delta province that is 102km away from Ho Chi Minh City, Sokfarm still has an international mindset of developing its business strategy.

Ngai has tried his best to expand Sokfarm’s foreign markets, believing that Vietnamese agricultural products would be a magnet for customers.

After gaining a foothold in the Netherlands and Cambodia, their products arrived in Japan in October 2021 thanks to one of their partners, Luu Thi Hang.

Having worked in Japan for many years as an interpreter, Hang found out the unreasonable fact that despite Vietnam ranking 5th in planting coconut trees, the products that were made out of coconuts in Japan mostly came from the Philippines or Thailand.

The mother of two children, Hang has never launched a company before but she has the professional capability to find out solutions to any problem.

She taught herself everything needed to export coconut syrup from Vietnam to Japan.

In Hang’s experience, if the Japanese like Canadian maple syrup and other similar natural products, they would be likely to welcome Vietnamese coconut flower syrup too.

Hang arrived at a decision to import the syrup from Sokfarm then, but she spent many months preparing before realizing her idea.

She chatted with Ngai nearly every day and it took them several months before agreeing on the final decision to import the syrup. The first obstacle they had to overcome was to make the product meet all the requirements to be shipped to Japan.

Until September 2021, Sokfarm's nectar had met more than 300 quality standards to convince Japanese authorities that their product is a syrup, not a kind of water, which would require more complicated paperwork.

Not only do the quality issues have to be settled, but the young entrepreneurs have also made efforts to meet the strict criteria on product labeling, including character fonts, languages, and more.

Hang has successfully registered a store selling the syrup online at Rakuten, one of the two most popular e-commerce platforms in Japan along with Amazon.

To date, Sokfarm’s products have been sold to Thailand, Cambodia, and Japan, with many more markets on the radar screen, according to Ngai.

In 2021, Sokfarm was the only enterprise in Vietnam to be honored at the ASEAN Business Awards, particularly in the category of Inclusive Business.

This year’s beginning, Thy was one of 57 outstanding young individuals who were given the Luong Dinh Cua Award.