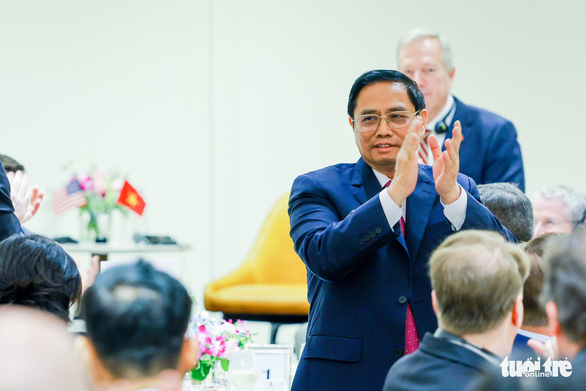 Many U.S. business representatives consider Vietnam a leading market in ASEAN and hope to boost their investments in the country, according to statements made at a working breakfast attended by members of the U.S. business community and Vietnamese Prime Minister Pham Minh Chinh on Thursday.

As part of his visit to the U.S. for the U.S.-ASEAN Special Summit slated for May 11 to 17, PM Chinh attended a breakfast meeting with the U.S. business community, hosted by the U.S.-ASEAN Business Council (USABC) and the U.S. Chamber of Commerce (USCC) in Washington, D.C..

Speaking at the event, USABC President and CEO Ted Osius, who is former U.S. Ambassador to Vietnam, said that Vietnam has made it easier for the U.S. business community to invest in the Southeast Asian nation.

U.S. Trade Representative Katherine Tai affirmed that Hanoi is one of Washington’s largest ASEAN trading partners, reflected by the signing of the U.S.-Vietnam trade agreement in 2001 and the Trade and Investment Framework Agreement (TIFA) in 2007.

As the USTR is interested in creating sustainable agriculture based on science and effective management, digital economy development, and support for small and micro businesses, it wishes to cooperate with Vietnam in these fields to promote trade ties between the two countries, Tai said.

Many U.S. business representatives at the working breakfast asserted that Vietnam is their leading partner in ASEAN and they will closely coordinate with Vietnamese businesses and authorities to boost investment efficiency, the Vietnam News Agency reported.

They have also committed long-term investments in the Southeast Asian country.

“Vietnam has established itself as a leader in the ASEAN region,” said Myron Brilliant, Executive Vice-President and Head of International of the USCC.

“Not only has trade grown but Vietnam’s commitment to structural and fiscal reforms is serving as a model to other countries.”

Cooperation between Vietnam and the U.S. continues to develop deeply in all fields, particularly in investment and finance, with businesses from both sides playing a very important role in fostering bilateral ties, PM Chinh told the meeting.

An annual trade growth rate of 17 and 20 percent over the past two years, respectively, proves that there remains ample room for economic development between the two countries, Chinh said, adding that Vietnam considers the U.S. its leading partner.

The U.S. had invested more than US$10 billion in Vietnam by March of this year, but this is still not commensurate with the potential of American investors, the prime minister commented.

The PM added that Vietnam has shifted to a strategy of living safely with COVID-19 in October of last year and attained an impressive 5.03 percent GDP growth rate in the first quarter of this year.

Vietnam has been named among the world’s top 20 host economies for foreign direct investment, the PM cited the UN Conference on Trade and Development (UNCTAD).

To achieve these goals, Vietnam will keep building an independent and self-reliant economy with practical and effective international integration, and it expects the U.S. and other important partners to assist Vietnam in this regard, the PM concluded.