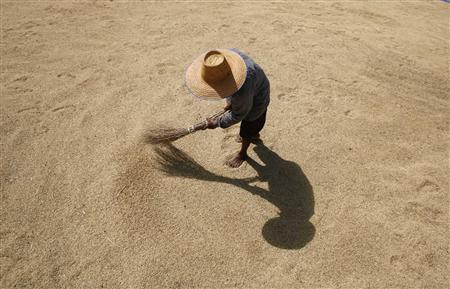 BANGKOK -- Thailand and Vietnam are in talks on a pact to raise the price of their rice exports to increase their leverage in the global market and improve farmer incomes, a Thai government official said on Friday.

Agriculture officials from Thailand and Vietnam, the world's second and third biggest rice exporters, met in Bangkok on Friday to discuss joint measures to support their farmers and rice industries and manage growing production costs.

"We aim to raise rice prices, increase farmer income and increase bargaining power in the global market," Thai government spokesperson Thanakorn Wangboonkongchana said in a statement after discussions on the sidelines of a farms expo.

"The rice price has been low for more than 20 years while the cost of production has been increasing."

Vietnam's agriculture ministry could not immediately be reached for comment.

Vietnam and Thailand account for roughly 10% of global production of rough rice, and about 26% of global exports, according to the U.S. Department of Agriculture.

Any move to raise prices would be bad news for buyers and consumers amid rising global food prices. Big exporter Thailand is seeing rising foreign demand for its agricultural commodities, helped by a weaker currency.

India, the world's top rice shipper, accounts for about 40% of global supply but prices hit a five-year low this week on a weaker Indian rupee and abundant supply in top exporting countries.

The chairman of Vietnam's Food Association said his organisation would meet its Thai counterpart in June for more talks on rice production but would not aim to control prices.

"The meeting will focus on measures to cooperate in sustainable food production," Nguyen Ngoc Nam told Reuters. "It's not reasonable to talk about raising or controlling rice prices at this time when global food price is on the rise."

He said Vietnam's priority was managing exports to ensure its own food security, adding it would export 6 million tonnes of the grain this year, down from 6.24 million tonnes last year.

India does not plan to curb rice exports because it has sufficient stocks and local rates were lower than state-set support prices, trade and government sources said on Thursday.