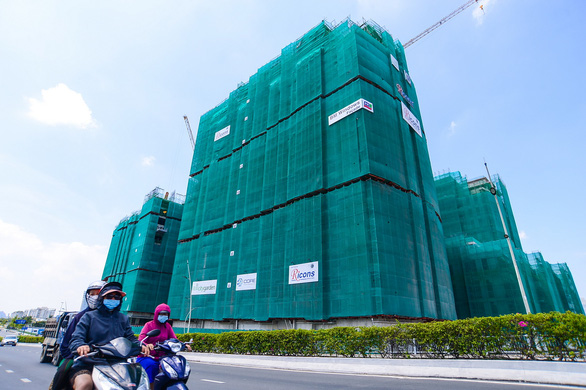 Real estate prices in Ho Chi Minh City skyrocketed during the second quarter of this year to hit record highs, with some villas in the city currently on sale for VND700 billion (US$30 million), according to statements given at a conference on Tuesday.

At the 'Money Flow and Real Estate Trends in Late 2022' conference hosted by Cafeland, a real estate website, Vo Huynh Tuan Kiet, director of housing project marketing at CBRE Vietnam, shared that houses and villas in urban areas in the east of the city are currently on the market for prices ranging from VND200 million ($8,580) to 400 million ($17,200) per square meter.

Regarding housing supply, Kiet said that the number of available apartments in Ho Chi Minh City soared to 12,000, up from about 1,000 in the first quarter of this year.

The supply in the second quarter is nearly equal to that in the third quarter of 2019, a sign that the market is making a serious comeback.

These apartments, however, are primarily high-end and luxury units in some large projects, so the number of projects launched in the market was smaller than that of the same period in 2019.

Kiet also noted that apartments in the affordable or mid-end segments are rare to come by these days, and often only available in suburban areas.

Su Ngoc Khuong, senior director of Savills Vietnam, shared that “apartment supply will be limited until the end of the year and apartments will be priced high.”

"Apartment prices in Ho Chi Minh City are much higher than the incomes of local residents, especially those aged 30 and 35," Khuong said.

“Therefore, many people are looking for units in nearby provinces like Long An, Binh Duong, and Dong Nai.”