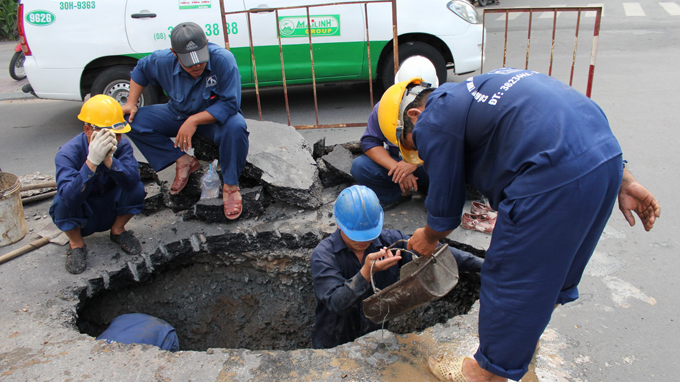 Imagine the scenario: You are riding down the road on your motorbike on the way to work or a meeting without a care in the world, and boom you plunge a few meters under the road surface and maybe a few days later you are six feet under meeting your maker.

This is no end of the world Hollywood disaster movie. This is 2013 Ho Chi Minh City. The threat to life may be a million to one but it is very real.

Now holes, sometimes called death holes, appearing in the road are not unusual for Vietnam especially if you are brave enough to ride around the country’s rural roads but when they appear on busy city streets, the alarm bells are ringing.

My normal route to the office would see me go past the very same spot on Nam Ky Khoi Nghia-Ham Nghi crossroads in District 1 where a huge hole more than 3 meters long, 2 meters wide, and 1.5 meters deep was found on Saturday afternoon.

It was reported that the hole was even getting bigger due to the help of strong water flow beneath. How did it happen? Well the road surface started to sink on Saturday and literally an accident was waiting to happen and after a truck passed over it, it finally collapsed according to a nearby xe om driver. Fortunately no vehicles fell into the hole or there could have been casualties.

According to reports, an initial investigation showed that an underground water outflow from a nearby broken sewerage section undermined the underground soil structure at the site, leading to the subsidence. Okay it was repaired a few days later but how long will that patch-up job last?

If that wasn’t bad enough, on Monday afternoon four holes caused by similar subsidence appeared on a three meter section of Truong Sa Street in Phu Nhuan District with the road surface around the holes sinking. It was reported that an inspector from the Transport Department inspected the holes with representatives of the Urban Traffic Management Zone No. 1 and the HCMC Environmental Hygiene Project Management Unit. As yet there are no conclusions but the quality of the road surface on Ho Chi Minh City streets is notoriously bad in my experience. Apparently the road bed was not as safe or durable as required and authorities will investigate.

Last October two large holes were found on the same Truong Sa street a few months after it had been built. And a hole 2 meters long, 1.5 meters wide, and 0.8 meters deep, was seen on a stretch of Hoang Sa Street that connects with Tran Van Dang Street in District 3 also in October.

While examining the hole, traffic inspectors surprisingly found a vault with a width of about 2 meters created underground around the hole.

Two young people fell into another large hole that suddenly appeared on a section of the same Hoang Sa Street in Tan Dinh Ward, District 1. Luckily, they were only slightly injured.

The problem prompted concerned municipal state agencies to review the quality of the road.

Riding on the city streets is dangerous enough without fearing the ground is going to open up and swallow you. Surely more can be done to ensure the safety of city residents. I can appreciate that the sewage and draining system under the roads is not strong enough to cope at the best of times, and it is going to take a mammoth task to fix that in a short time period but never fear, help may be at hand. Now that the metro projects in the city are underway underground, maybe this is the perfect opportunity to kill two birds with one stone. I’d certainly feel a lot safer knowing that a world-class sewage and drainage system is going to halt the city’s notorious street flooding during the wet season, which appears to be making the job of building strong roads impossible. Otherwise the death holes in the road will continue to appear when you least expect them.

I remember a few months after I moved to HCMC, I was waist deep in water on my bike heading down Le Van Sy Street in District 3 and I looked across the road to some commotion. A taxi was halfway down a hole in the ground, looking like Titanic before it finally sank into the Atlantic Ocean.

Rainy season and soft road surfaces without the proper foundation is a recipe for disaster. I just hope and pray that there are no casualties while the road surface of Ho Chi Minh City is of such a poor standard. Let’s hope that it doesn’t take a tragedy before something is done to rectify the notoriously bad quality of our city’s streets.