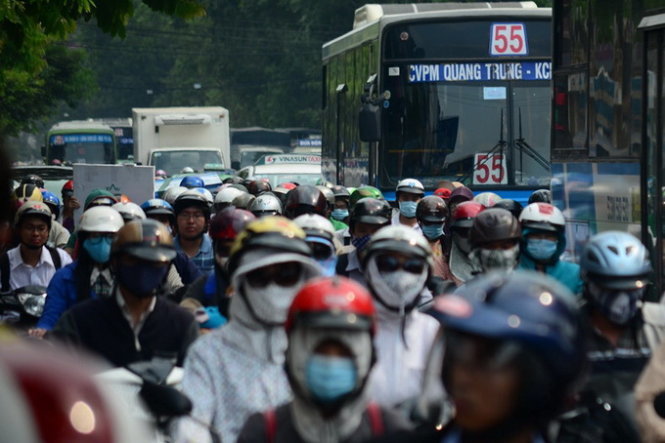 Editor’s note: Chau Thanh Nghia dreams of a traffic jam-free Vietnam in 2035 as he joined the “Ky Vong Viet Nam 20 Nam Toi” (“My Expectations for Vietnam in 20 Years”) writing competition.

Traffic gridlock is considered an incurable disease of many major cites around the world. In Vietnam, the phenomenon happens every day in Hanoi and Ho Chi Minh City, becoming a huge nuisance for millions of city dwellers.

I am hoping and imagining about a Vietnam in 20 years when there will be no traffic congestion in its cities.

In the next 20 years, when going to the streets, you will no longer have to struggle with seas of people and vehicles as you used to. You can get through the streets leisurely and safely, and travel to anywhere you want without the slightest concern about traffic jams.

In the next 20 years, you will no longer feel tired, stressful and annoyed by the noises and dust coming from somewhere on the streets. You will no longer have to force yourself to get up early in the morning to go to work for fear of traffic congestion.

In the next 20 years, you can feel free to enjoy the fresh, cool air from parks and rows of trees along the roads.

You can save a lot of money and precious time whenever you go out.

And you can easily trade and exchange goods and products at any place in the city without having to think about traffic jams.

Solving the traffic congestion issue in the city would not only help vehicles travel easier, but also help prevent many unpredictable consequences such as traffic accidents, economic losses, environment and air pollution and pollution-related diseases.

Hanoi and Ho Chi Minh City are heavily investing in building and developing urban areas in a harmonious, civilized and modern way, living up to the development of the country. To this end, in my opinion, the first thing to do is resolve the traffic congestion issue in the cities.

From the view of a pedagogy student, I hope my suggestions will somehow contribute to help the cities solve the heavy traffic problem.

First of all, we must invest in building and developing major public transportation systems such as urban railways, subways and buses.

At the same time, we should enact measures to prevent the use of personal vehicles, such as levying higher vehicle taxes and reducing the number of parking lots.

Encouraging people to use public transportation will partly help ease the heavy traffic.

Speaking from the experience of many countries, if appropriately invested and exploited, public transportation systems can help reduce traffic congestion by as much as 27 percent.

Second, the streets and roads must be widened in a scientific way. For instance, we should build streets that prioritize cars or motorcycles or those where individual vehicles are banned and only pedestrians are allowed.

Reality shows that vehicles of all kinds share the same lane on streets across Vietnam, making traffic quite a mess.

Third, we should prioritize developing stationary traffic. First off, each office building or apartment block must ensure there are enough parking spaces for those living and working there.

In Kuala Lumpur, the apartment buildings, hotels, or offices all have two to three floors dedicated to parking, besides two to three basements.

In Beijing, at public parking lots, the municipal authorities set up three-story houses, which are made of steel, have a simple structure and are easy to assemble, for more parking spaces.

With these measures, many cities have met the demand for parking of the locals at their residence, workplace and entertainment areas.

Hence, in order to solve the problem of traffic congestion, we need to combine such tasks as increasing traffic supply, controlling the growing traffic demand, and traffic safety education.

The reason for this is like when you prescribe medicines to cure an illness, you first have to identify the disease. And any prescription will contain different kinds of medicine to have mutual effectiveness.