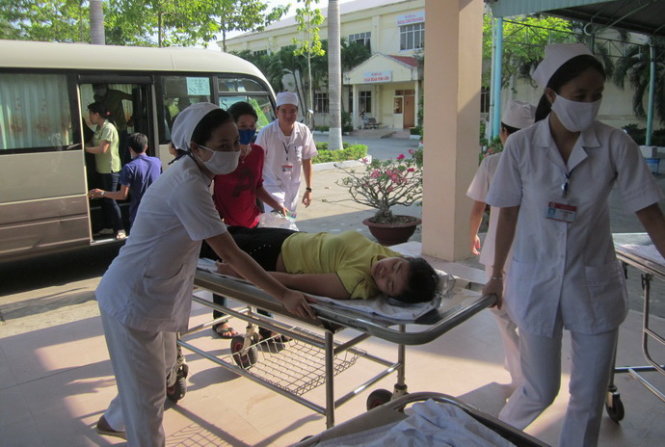 Vietnam will be free of unsafe food in 2035

Editor's note: That Vietnam would be free from the grip of hygienically-unsafe and even toxic food is a dream cherished for Vietnam in 2035 by Nhien Phuong, 21, as she joined the “Ky Vong Viet Nam 20 Nam Toi” (“My Expectations for Vietnam in 20 Years”) writing contest.

One of my friends often jokes, “We may die from either toxic food or hunger if we abstain from such food, so let’s just eat as we’ll die anyway.” Faced by the omnipresence of unsafe food, many people also tend to think this way.

We are gripped by fears of contaminated food or beverages, which are found everywhere. Coffee may be “ingeniously” concocted from corn flour and harmful chemicals; and meat and its derivatives are soaked in dangerous preservatives. No products available at conventional markets are now safe, ranging from fake chicken and eggs to fish and vegetables.

This insidious food is a major culprit of the surge in today’s illnesses, particularly cancer. However, though well aware of the sinister effects, we have no choice but to consume them.

As a young person, I aspire that two decades from now, Vietnam would rid itself of toxic food. Food then might fetch slightly higher prices, but it is safe and clean. Housewives would be worry-free while shopping for food at conventional markets. Students would relish their street snacks without being concerned about food poisoning or diarrhea. One would feel safe enjoying drinks at sidewalk stalls just as they do in lavish restaurants, with the two places differing only in tastiness and service quality. Life would be carefree then.

To realize this dream, I may suggest the following solutions:

First, competent agencies need to step up inspections to stop unsafe food in its tracks. Whether displayed at supermarkets or conventional markets, food is supposed to be equally safe. Buyers would be able to comfortably make their choices.

Secondly, individuals and groups producing toxic food should be sternly penalized by law. Administrative fines are hardly enough to deter them, as violators can easily pay token sums from their whopping profits before resuming production. In my opinion, such offenders deserve jail terms, which may be short or long depending on how severe their infringements are. This is not necessarily a satisfactory measure, but at least it may serve as a deterrent.

Thirdly, the local media should raise public awareness on food safety. Press agencies should create and publicize investigative features on how hazardous food is made. In addition, the media needs to provide guidance for locals regarding how to wisely select their food to stay healthy. In the Internet age, people can get ready access to such information.

Fourthly, producers and peddlers of unsafe food must be fully conscious of what they are doing. Perhaps they remain nonchalant that such food cannot kill consumers right away, or they choose to do so for huge profits at the cost of consumers’ health, or even lives. Such attitudes can only be fixed by education provided by families and schools. A person with a good background would do the good thing and lead a righteous life.

Fifthly, State officials who abet or turn a blind eye to unsafe food producers and distributors for bribes in return must be unforgivingly penalized. But for their “help,” the local market would not be crawling with tainted food as it is now. Their crime is the most serious and appalling.

These measures will hopefully help avert the spread of tainted food on the local market. I believe that if all of society joins hands, the aforementioned dream would soon ring true, bringing about a more fulfilling life.

Keeping your belongings safe when travelling in Vietnam (Part 1)

2016 was already impressive because arrivals hit 10 million for the first time ever, registering a 25 percent increase in arrivals over 2015