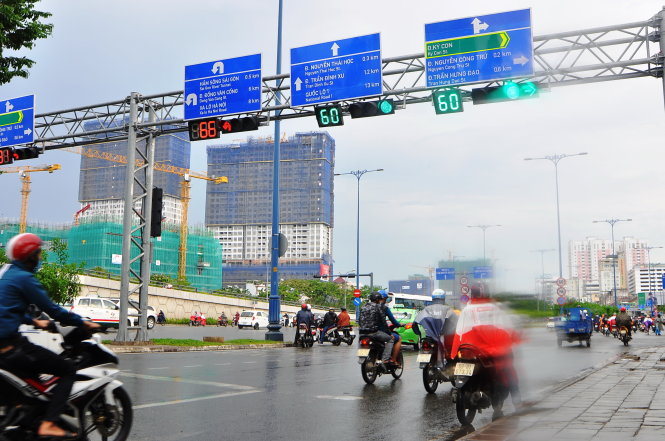 A number of expats living in Vietnam have shared their opinion with Tuoi Tre News on how to make the country more user-friendly for tourists.

The comments come after Ho Chi Minh City’s proposal to trial English-Vietnamese street signs in an effort to make it easier for foreign visitors to navigate the city.

I think Ho Chi Minh City’s plan to implement dual language street signs is a great idea that will encourage tourism and make navigating Ho Chi Minh City much easier for both expats and tourists.

Many of the existing street signs are worn, weathered or damaged, and in the case of popular tourist attractions there is no English signage at all.

I think one of the biggest stumbling blocks for tourists is that Vietnamese words tend to be quite short (because only one syllable is used per word) and because they don’t understand the diacritics used in the Vietnamese language, many signs look the same to tourists' un-trained eyes.

I think replacing or adding to the existing signage would be cost-effective in terms of making life easier for expats, tourists and even for the local population.

In the UK, we already have signs in Wales in both English and Welsh. In England itself, we have cities that already use dual language signs. For example, the city of Liverpool has a large number of Polish immigrants, so many road signs are in both English and Polish. Germany has dual language signs for recreational, heritage and tourist sites and many other countries I have lived in follow a similar trend.

I do think it’s important that Vietnam embrace some sort of internationally recognized format instead of just using blue signs everywhere, for everything. Tourist attractions and heritage sites usually use a brown background and an icon depicting the type of site it is. Motorways and primary routes have a blue background with bold white text while secondary routes have a white background and black text for example. Vietnam would benefit from more meaningful sign designs as it continues to develop its own infrastructure and tourism increases.

On a personal level, after living in Hanoi for more than 3 years, I do find road signs confusing but this is purely because my Vietnamese language skills are poor. I find navigation much easier when I use GPS or Google Maps but that has its own problems. It’s not recommended on a motorbike for example, as your attention should be on the road, nor whilst walking as you have to be mindful of potholes, raised paving, parked motorbikes, etc.

I think dual language signage would boost the user-friendliness of the city, however, it’s not a “magic bullet." Many other factors are important in making Vietnam more tourist-friendly, for instance dual-language information (radio, TV, newspapers etc.), keeping the sidewalks clear so they can be used for what they were built for (walking on, not as an obstacle course), enforcing traffic regulations so tourists can use the road crossings without fear of being killed.

Noise also seems to be of particularly high concern. When you book a hotel or hostel for a few weeks, you want to be able to sleep at night, not listen to jack-hammers until 2:00 am and then be woken up at 5.30 am with extremely loud music from the shop next door. I know there are laws for this but the reality is people do what they want, when they want.

How about some local "tourist committees" made up of expats and local authorities to discuss problems and make recommendations? After all, who knows what tourists really want better than those who regularly travel?

Living in Saigon for over 12 years I must say that finding my way around the streets of Vietnam has rarely been a problem for me, for a number of reasons. Vietnamese names are easy enough to read in my opinion, street signs are on every corner and nearly every building has its address displayed. It's been so much easier than in India, and sometimes even easier than back in Australia! It’s a different story trying to find my way around the 'hems' [alleys], however. They're like another world.

Putting street signs in English is, to me, a very bad idea. First of all, it costs money that could be much better spent on any number of things instead. It would also be inconvenient and would have few if any benefits. Firstly, the Vietnamese alphabet is very similar to the English alphabet, so Vietnamese signs can already be read to some extent by foreigners. Pronouncing them is a problem, but writing the names in English would not make it easier for pronunciation (indeed, without the accent marks, pronunciation would be harder).

Second, nearly all the streets here are the names of Vietnamese people which cannot be translated. The other countries I have been to with bilingual signs are ones that have alphabets very different from English, where any attempt to read the name is impossible, for example Thailand or Cambodia.

Specific tourist attractions would benefit from bilingual signs, as their names are readily translatable, the places are of special interest to tourists and the cost of this signage would be very low.

There are more important issues

Regarding bilingual street names, I don't have a problem with Vietnamese names as I have travelled in many countries and I can use a dictionary. Many cities and towns in Cambodia and Thailand use bilingual signposts, but they don't have Latin script, so that's a different situation. Unless you're familiar with the Khmer and Thai alphabets, it's impossible to read the signs in the local language.

I think there are more important issues for tourists that I’ve seen during my two years in Hoi An, e.g. not making exaggerated statements about tours, less aggressive sales techniques (paticularly in Sa Pa), visa on arrival, etc.

Moreover, many Vietnamese people are bad drivers, so I think more traffic police would be good. The government should put habitual traffic offenders in prison.

Road traffic signs in the countryside are confusing. Sometimes there's no signage, so you need to use a GPS or electronic map.

One more thing is that Vietnamese people don't like to lose face, so they often answer "yes" to every question, particularly about tours or facilities, meaning tourists' expectations aren't fulfilled. If they don't understand a question, they also just say "yes". They think they will lose face if they admit that they can't understand. This is a problem here.