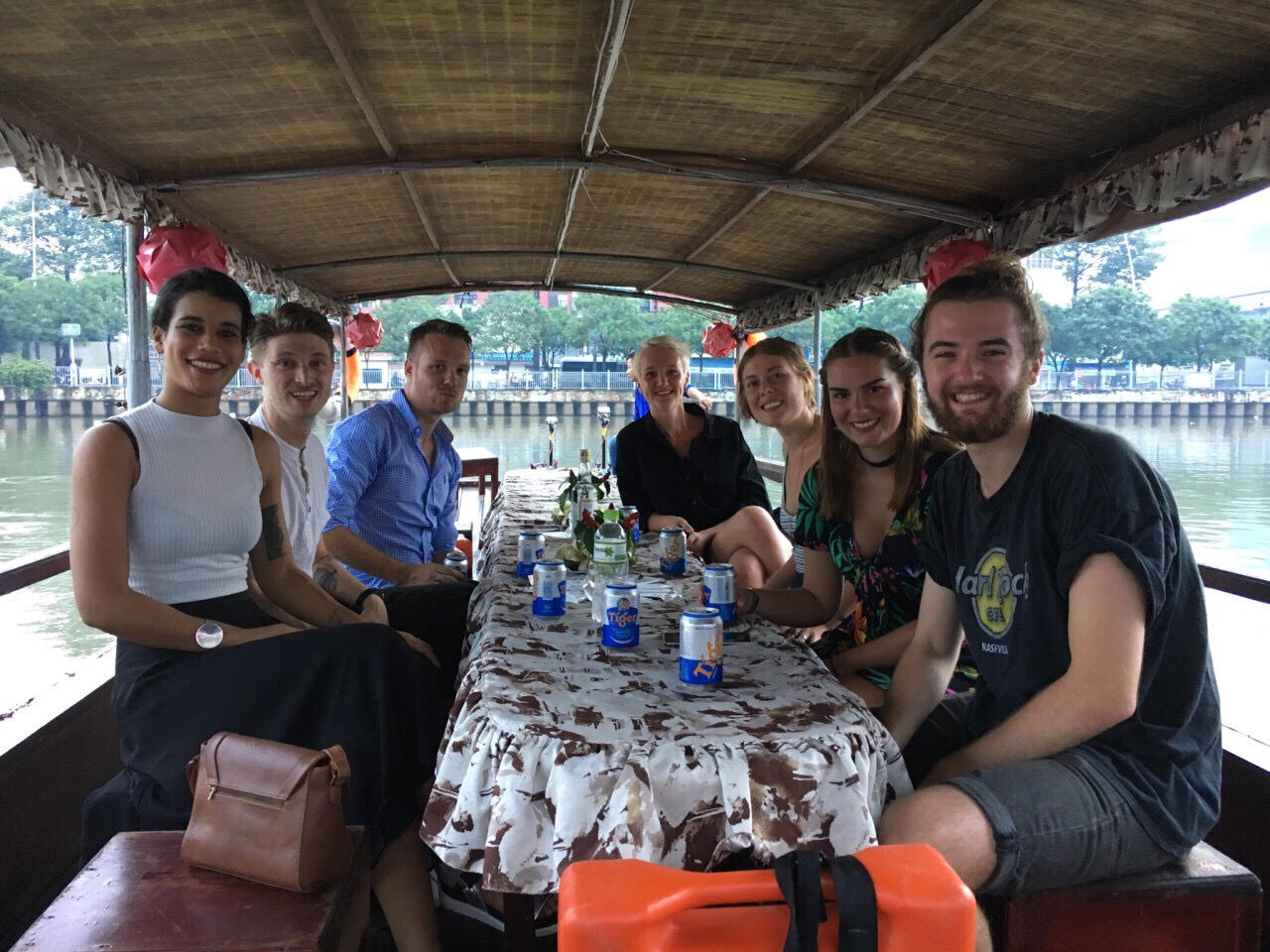 A number of expats living in Vietnam have responded to Tuoi Tre News’ call for opinions regarding the development of waterway tourism in Ho Chi Minh City.

Besides the already existing Nhieu Loc – Thi Nghe canal tour, the city is planning to make the most of its rivers and canals to develop a thriving waterway tourism industry, with multiple projects set to run in the near future.

By 2020, at least seven tours are expected to open along local rivers such as the Saigon River, Dong Nai, Soai Rap, Nha Be and other canals that snake their way through the southern city.

“I took a boat tour along the Nhieu Loc – Thi Nghe canal on June 26 for my birthday with my friends. Our group was seven people in total.

I looked around on Google and found four or five companies that do river cruises in Saigon, so we chose this one because surprisingly all the other tours were quite expensive. This one was more reasonable.

Lachlan Trumble (C) and his friends in a supplied picture taken during their boat tour along the Nhieu Loc - Thi Nghe canal on June 26, 2017

We started around 6:00 pm in District 1 and ended up in District 3 after two hours of drinks, food, live music and a magic performance.

The artists sat on three different boats along the canal and waited to join us in our boat along the way.

Every twenty minutes we approached a different boat and they would entertain us for about ten minutes.

We really loved it. It was relaxing and really nice to be on the canal, away from all the traffic and the entertainment was also really fun.

With regard to the city’s waterway tourism development, I think it’s a very good idea, because it’s good to see other areas, not just Districts 1 and 3.

However, I think the city should focus on cleaning up the canal as it currently is pretty dirty, which is not nice I guess, but at least it’s not smelly.

Also, it would be better if the tour had an English speaking tour guide to give more information about the buildings along the canal.

Life jackets and safety regulations should also be more focused on ensuring the safety of tourists taking the tour.

Boats instead of taxis

I am really excited to see the city turning its attention to the waterways. The roads are choked with traffic and it is no fun to travel from place to place in expensive taxis.

Boat transport is rare in modern cities. Tourists love boats because it’s relaxing and it’s a novelty. They also love to use the fast boats that zoom around the canals in Bangkok and Venice – it is something they remember and love to talk about with friends.

The canals in Bangkok are also not very clean but the tourists just love the thrill of moving around the city at high speed at a very low price. The canals in Venice are cleaner of course – but they didn’t used to be. They have put a lot of effort into cleaning up the canals and making the city more beautiful. Everyone knows that Vietnam is a developing nation so it doesn’t have to be so clean yet, the experience is the thing that matters.

If you are promoting journeys along the canals as tourist attractions or tours, the tourists are going to be disappointed. Not many of the canals have anything worth seeing. Some have the occasional pagodas and rows of Frangipani trees or some rusting shacks but that is all. I would not pay $10 to look at that. But if the boats are a form of transport around the city that is also used by locals, the tourists will love it because it is a fun boat trip and it is a much nicer way of getting from A to B.

Maybe the city should shift its focus away from tourism and look more towards making itself more ‘liveable’ for everyone. That way, everyone wins and maybe it will relieve some of the traffic congestion. Tourists would definitely use the boats instead of taxis. It would also make it more practical to use hotels in outlying districts if they could get into D1 more quickly by boat. That would help locals too.

Western tourists and backpackers do not enjoy being treated like tourists. They come to see how the locals live and want to experience life in Saigon.

Pollution is a challenge

With the warm weather of Ho Chi Minh City, experiencing Vietnam via waterways could be a great experience for tourists. Many great tourist cities around the world have similar attractions and this would help Ho Chi Minh City become a more sought-after location in Asia for foreigners.

The city has an opportunity to provide some amazing experiences for tourists to see the city and regions via the waterways.

As a tourist, as I once was, I find the view of Ho Chi Minh City amazing.

Ray Kuschert in a provided picture

In my opinion, waterway tourism would benefit from having tours that include restaurant visits, pagoda visits and things to do as the tour moves around the waterways. Also shopping could be included. Unlike a bus tour, people could experience all aspects of the regions of Ho Chi Minh City via the waterways.

In the outer regions there are farms, housing communities, shops, pagodas and historical locations that are accessible via the waterway.

The waterways are also a peaceful and pleasant way to spend a day visiting attractions, including food stops, and would make a memorable experience for visitors to Ho Chi Minh City.

However, it will be important to prepare the canals to ensure they are clean and presented in their best condition.

Pollution is the greatest challenge. Some waterways are very polluted and smell. Cleaning the waterways is the most important issue.

Many waterway tours operate around the world in many forms. From the river cruises in Germany to floating restaurants in Sydney, people are always enjoy experiencing life on the water.

In Sydney, my hometown, there are cruises that take people around the harbour and into the river whilst the customer eats local food and is able to watch a show. It gives them the opportunity to take photos and see the shoreline of the city. A special cruise is the sunset cruise where keen photographers take photos of the city at sunset.

Waterway tourism already operates successfully in the Mekong with morning tours of the floating markets in Can Tho and the multiday tours to Cambodia. We have successfully operated these tours that are now world famous. The Saigon River and canals are not well known around the world. Hopefully this will change.