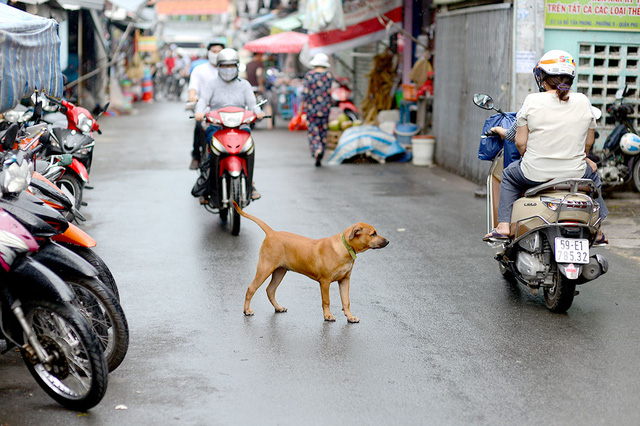 Few subjects arouse as much emotion as man’s best friend, the dog. No matter what I say about this, I’m sure someone somewhere will disagree. In both mainstream media and online, the debate has raged over dog poisonings, keeping dogs on a leash or muzzle in public places and impounding stray or unattended dogs off the streets in Vietnam.

With Vietnam’s haphazard ways of enforcing laws, particularly at provincial levels, it’s unlikely that large-scale improvements in dealing with the canine denizens will come soon. While changes are occurring to dog meat consumption and the growing crime rate associated with dog theft, there are glaring gaps in both the laws and people’s care for dogs.

While I have no reliable number on the general population of dogs in Vietnam, you probably get an idea from Wikipedia’s page on dogs in the country, which claims that 5 million dogs a year are consumed.

The new laws from September 15 stating that all dogs must be on a leash or muzzled in a public place simply puts the country, or at least Ho Chi Minh City, at the same level of regulation as many overseas nations. And yes, it is either leash or muzzle – there’s no requirement to have both at the same time although it’s pretty clear that a leash is a necessity.

What’s strange to me is there’s no legal requirement for a dog tag identifying the animal with a name and phone number. Certainly compulsory identity tags would be useful. Firstly if the dog escapes or is impounded for wandering the streets untended, the owner can be notified, warned or penalized without too much fuss. Also if the animal bites or attacks someone, the responsible person can be quickly found.

Impounding the dogs will spread across the urban cities and towns when more local governments get this organized. How to control the accountability of the authorities for the dogs in their care is a different question with no easy answer. While the current system allows holding the dogs for 72 hours and then euthanasia, there doesn’t seem to be a mechanism to prevent staff from selling the dogs to meat markets or restaurants. The opportunity for corruption in this situation is worrying.

Impounding dogs has been around for a long time. How many times have you had a dangerous encounter with the stray dogs casually strolling across roads? As a health issue, dogs in Vietnam contributed to the 2009 spread of cholera and rabies is taken very seriously here. The government inspector has checked my vaccination books for all the dogs I’ve had.

Typical of the confusion that you see everywhere in the country between modernizing and traditional habits are the countless open air meat market stalls, mostly unregulated with highly questionable hygiene habits and little or no real documentation for the meat. Yet, if meat stalls are now required to upgrade their practices, why does dog meat remain unchecked and unmonitored?

The government dog-catcher, with no real uniform, ID or notice attached to his bike, comes around every month, patrolling our area. As far as I know in Hoi An, there’s no real official holding pen or information about what happens to pets that are nabbed. Why?

What’s maddening is the casualness of the local people around me. My neighbors just let the dogs nap in the street, wander up and down sniffing everything, although they do usually keep them in their yards or homes after sunset. If a dog goes missing or is stolen, they just shrug their shoulders and a new pup is sitting in the gateway a week later.

It’s also my opinion that the huge activity of dog-stealing and ransom attempts is fueling the country’s drug trade and gambling addiction since it’s such an easy way to make fast, unaccountable cash. Include in that crime the willingness to use violence against both the animal and the owner using illegal weapons, it presents a social evil and danger to the general public. I believe penalties should be much higher in both money fines and jail time.

Dog meat, particularly in the north of the country, is considered something of a delicacy although having eaten dog meat myself; the taste is very bland and boring. With rising incomes, the popularity of dog ownership (and pet cafes!) and the trend toward more supermarket variety products, I hope eating dog becomes a thing of the past.