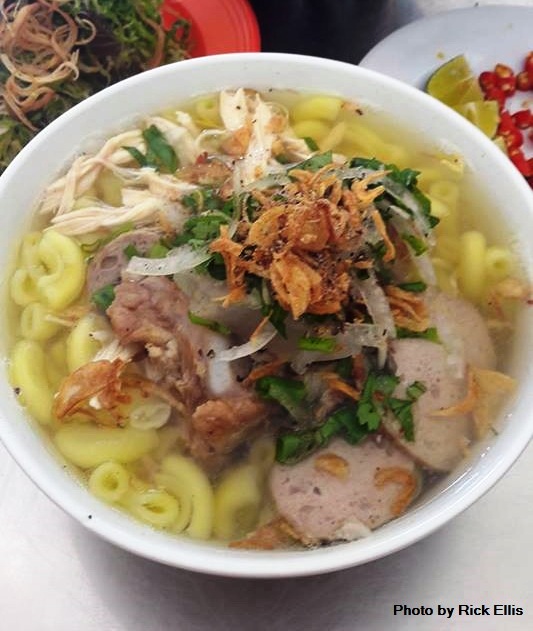 Priceless lesson with a bowl of noodles, of sorts, in Vietnam

Editor's note: Rick Ellis was born and raised in Canada. Now completing his 39th year overseas, Rick has travelled to hundreds of destinations in over 60 countries and lived or spent extended time in nine countries, and has been a nomad in several Southeast Asian destinations for five years. He splits time between Da Nang and Da Lat during his visits with more destinations to be added soon.

I slowly suck in the delicious nui as I start into the soup, then spear a pork hock with one chopstick and tear it off the bone with a spoon. There are little shards of bone on some of the other pork pieces which force me to chew slowly and carefully, making it yummier as I get further into the meal.

Nui is a derivative of the French word “nouilles,” a generic term for noodles, but in Vietnamese it means elbow macaroni, great for slurping when you’re in the mood to use a spoon instead of chopsticks to get at the noodles. Apparently the soup is labelled nui xương heo – something to do with macaroni, bones, and pork, but I haven’t grasped the name yet, so I just point at the nui macaroni and it does the trick every time.

We can’t converse because Út’s shop has no Wi-Fi, so translations are impossible. Út’s English consists of “You!” and my Vietnamese isn’t much richer in content, but the message always gets across between us somehow. I confess to hijacking the Wi-Fi from the hotel next door, but the signal is weak, so voice-to-text translation often comes out gibberish.

A large sign mounted above the shop doors labelled Bin Bo spans the width of the shop. Bin Bo is a pan-Asian bastardization of the word “bimbo,” which in English is a derogatory term referring to a trendy, superficial young woman usually obsessed with the latest fad. Thus, over time, I was able to determine the shop was formerly a fashion outlet aimed at young women and the name atop it has nothing to do with Út and her soups.

Names notwithstanding (and I can tell you she makes an absolute train wreck out of “Rick”), one thing is certain: Út and I are wired up like the electric grid. I know everything she means and she always accurately interprets my gestures, mimes, and crude attempts at Vietnamese because she’s so switched on.Even Út’s name is a challenge: while pronouncing it the speaker’s cheeks must puff out as if blowing up a balloon or the operation will be incorrect and mean something completely different, which with my luck is usually something impolite. For a long time, I pronounced her name Úc, thus labelling her “Australia,” but she didn’t let on anything was amiss, she knew what I wanted to say. Út isn’t actually her first name, rather it refers to her family status as the youngest sister per Asian naming custom.

Sometimes we just click with people we meet and if we can’t communicate effectively with words, we find other ways, the magnetism of chemistry and friendship overcomes the language barrier. And with Út that’s always been the case, right since day one.

It started with her and the disabled lottery vendor who quite often eats his breakfast at the same time I do. The vendor has a severe physical disability which causes him to struggle with all his limbs resulting in a big challenge to hold his head normally, walk, and use his arms.

He’s as sharp as a tack and couldn’t possibly care less about his disability, carrying on with his business sporting an enormous grin, as if he owned the whole world.

I noticed after a few concurrent meals with the lottery vendor that Út always gives him his money back. He’ll place his cash on her steam table and stagger off to resume his beat, then she darts out onto the street and sticks it back in his pocket. He argues with her a bit, then finally flashes that grin, and shuffles off to sell his tickets. He knows better than to prolong the discussion with Út.

Whenever beggars come by, Út always gives them money, which is a bit of a head-scratcher because I know she just ekes out a living from her soup shop, and she has a son to raise. I’m not certain she only just ekes out a living, but she is open every day so she can’t have much cash to spare. No doubt she’d like Sundays to herself and her family, but the shop is always open.

One time during a lull in business we had a lengthy conversation through voice-to-text translation during which Út explained to me that she starts her day at three in the morning, opens at six, and closes at 1:00 p.m. She recently started to serve again from 4:00 pm until 8:00 pm or whenever the last customer leaves, so something is up with her finances.

There have been other telltale signs of minor hardship that caught my eye: Út used to have an assistant, a shy young girl, but recently she’s been absent.

In addition, Út religiously nurses a small glass of cà phê sữa each morning but recently it’s been conspicuously absent when I arrive.

On the surface there is no indication that business is lagging – on the contrary, there is a regular flow of customers present when I’m there just like there always has been. Perhaps the change of habit is due to an unforeseen financial emergency?

Út’s demeanour is unchanged – at least as far as I can tell. She’s extremely meticulous about her food and service, and always flashes a smile to the various vendors and neighbours that comprise her entourage.

There is also brusque money changing activity in the group of vendors: some collaboration is required to find someone in the gang who can change those pesky VND500,000 notes. Indeed, it’s quite an entourage because just outside the shop is a chợ cóc – a “toad’s market,” aptly named because the customers size up the goods on offer from a crouched position almost sitting on their feet which resembles a toad at rest. The vendors come in Út’s shop to grab a quick cup of tea, exchange the news, and to sell their meats and vegetables which end up in the soup cauldron in no time flat.

The whole scene is so civilized, all this behaviour exudes teamwork, neighbourhood spirit, friendship, and sharing, even by those who have little to offer. This behaviour is not learned or otherwise acquired – it’s natural, it’s how people are raised from childhood in this society.

For a Westerner like me coming from a cold, self-oriented, cash-grabbing society it’s a real lesson in life. Very often the less people have the more they’re inclined to give, that’s why Út and so many people in developing countries are happy to share with others who struggle even more to make ends meet.

Those people know something that many of us Westerners don’t grasp: it all comes back to us in the end, so the more we offer the happier we become, even if it doesn’t translate into material gain.