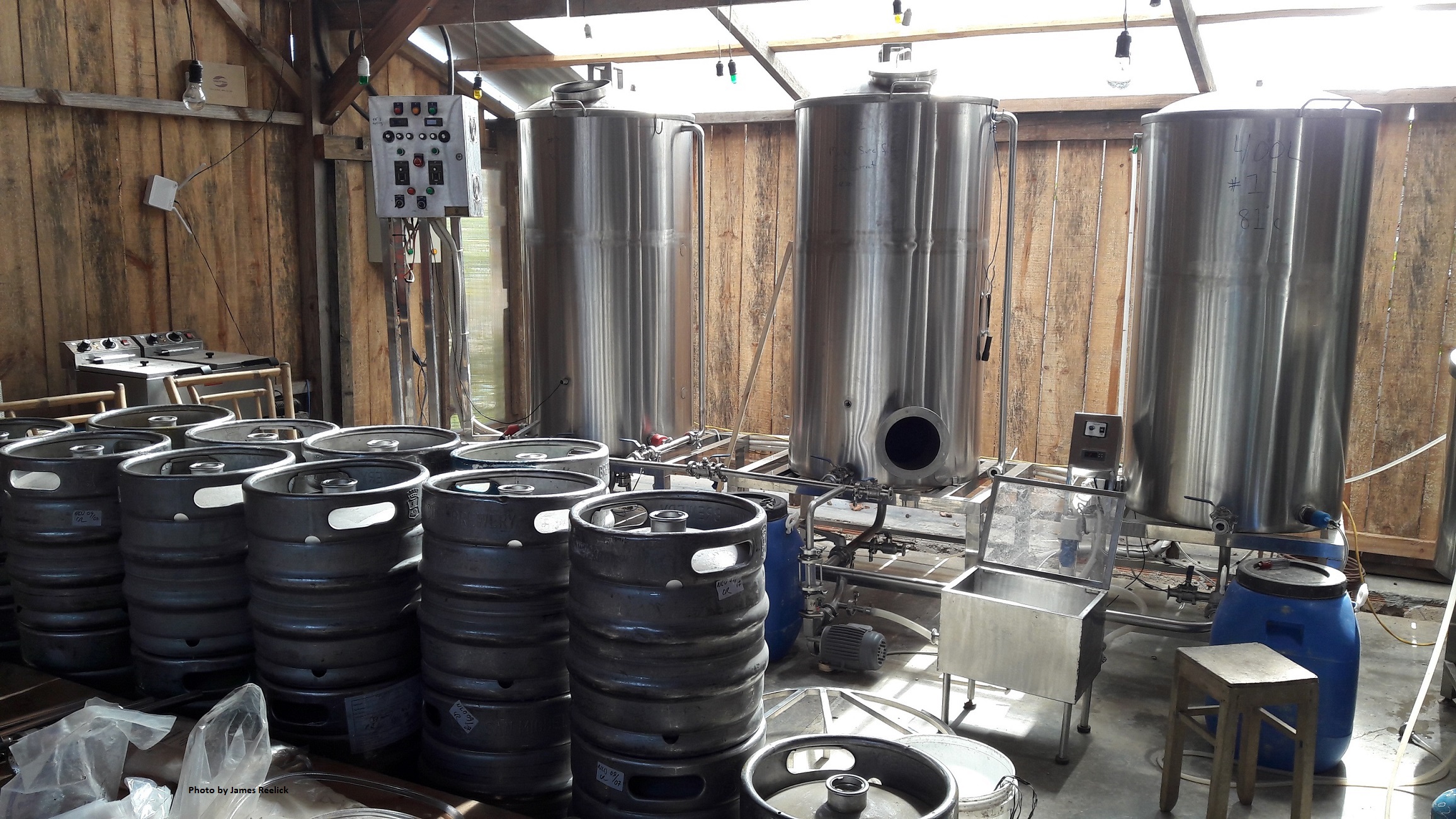 Craft beer and BBQ in the mountains in Vietnam

A few months ago, a buddy invited me to take a ride outside of Da Lat in the hills about 300 kilometers north of Ho Chi Minh City. He mentioned that a friend owns a restaurant and had recently started a craft brewery so we went to check it out.

We were greeted in Langbiang (about 14 kilometers north of Da Lat) by James Reelick, originally from Connecticut in the USA. Fed up with the madness and fast pace of life back home, James stuck a pin in the map seven years ago and headed for Ho Chi Minh City.

James filled us in on his first trip: “I came originally for three months in 2011, starting out in Ho Chi Minh City, but soon set sail for Da Lat and it’s cooler weather. During those first three months I studied and documented the economic status and outlook of Vietnam and was impressed with progress and projections.”

James returned to his contracting work in the USA later that year but came back to Vietnam several times over the next two years, then married and settled in Langbiang in 2013. “We had our daughter Trung in 2013, and my wife Lien and I decided to spend time with her for her first couple of years. Then three years ago we opened our K’BE Wood-fired Barbecue Restaurant in Langbiang.” James explained that K’BE means ‘buffalo’ in the language of the local K’ho tribe.

“Our philosophy is ‘farm to table’ meaning we use only the highest quality and freshest ingredients in our chicken, rib, and pizza dishes,” states James. “We researched extensively and couldn’t find local cheese and tomato sauce for our pizza, so we use imported products from Australia and the USA.”

“Our chicken, pork, and vegetables are all locally sourced naturally grown organic products without any preservatives or chemicals,” continues James.

The opening of the restaurant generated a lot of interest from newspapers in different parts of Vietnam as well as television interviews, so K’BE with its unique offerings and location has quite a following – over 3,000 followers of its Facebook page alone. A Westerner choosing to open a place with a unique philosophy and offerings is catching a lot of attention!

The big surprise was behind the restaurant inside a large wooden shed. I confess I expected a hockey garage-style setup with a few hoses and barrels but I was in for a shock! The brewery looked like a fancy corporate production operation consisting of steel vats, kegs, and barrels all connected by a network of pipes. Wow!

It all started when James visited a craft beer festival in Nha Trang a couple of years ago. “I was really impressed by the quality and freshness of the beer,” explains James. “I kept in touch with the brewery that organized the festival and last year I acquired all the components of my brewery that you see in the photos.”

“By August last year all had been installed and ready to roll,” he says. Simple as that. Then James started digging through all the documentation currently available on craft beer brewing until he was confident enough to start brewing. Sounds easy, but coming up with just the right formula is a daunting task, then finding the right ingredients, then making it a reality.

James is a “do-it-yourself,” creative, hands-on person who is confident taking on that type of challenge. I can well imagine him poring over volumes of brewing methods and ingredients until he found just what he wanted.

When I asked about licensing and permissions, James detailed the process, which was quite straightforward: “First, the Ministry of Health came and inspected the entire operation in September 2017, gave us their seal of approval and that was all we needed because a restaurant in Vietnam is allowed to brew beer on its premises.”

That approval is also the prerequisite to installing a “3-phase” electricity system needed to generate enough power to heat hundreds of liters of water to drive the brewing process.

“I had already researched and bought high-quality barley and wheat from Germany, which is very hard to come by here in Vietnam,” says James. “I started brewing in September last year and the first batch of Langbiang Mountain Beer was ready on October 14th.”

I was fortunate enough to get a taste of that first batch, and, as a beer lover, I was blown away by the smoothness, fresh flavour, and absence of an aftertaste. Impressive to say the least!

That first batch disappeared in no time flat partly due to James’ birthday celebration so when I returned to K’BE in November the second batch awaited testing. And it was just as good or even better than the first effort!

“It’s not only flavour that counts,” states James. “Virtually all available commercially branded beer has genetically modified ingredients and chemicals which ensure a longer shelf life.”

“Keeping up with our ‘farm to table’ philosophy and sustainable approach, we can honestly say that our beer is as natural and organic as can be found anywhere. Equally important is that anyone can brew it – I’ve proven that.”

Over the past six months wife Lien has taken over the day-to-day operation of K’BE, which has freed up more time for James to work in the beer laboratory just behind the restaurant. And James has a lot of projects on the horizon!

“I’ve just launched the Langbiang Home Brew Club. We’ve got a 40-liter system already set up including three stainless steel kegs. Club members can go to the brewery and brew their beer in less than one day, then return to the finished product in only two weeks’ time,” explains James.

The benefits to the club members are numerous: First, home brewing in this scenario ensures the highest-quality organic ingredients for the healthiest possible beer. Next, James supplies all the materials and expertise required including the steel keg and carbon dioxide (CO2) tap. If a keg remains untapped and protected from the sun and excessive heat, the beer will remain fresh for a year or longer.

“The brewing process is so simple that it can be done on a weekend or other day off. The cost comes out to VND20,000 per liter when using a basic keg or plastic bottles, with the fancier designer cork bottles we often see being more expensive,” states James. “The taste is far superior to the usual commercial offerings, plus it’s healthy, fresh, and at only VND10,000 for a 500 ml mug it’s a deal that can’t be beaten.”

This home brew scenario also allows James to use club member experience to develop new brands and flavours which will benefit everyone going forward.

James has a few more ideas up his sleeve which are just coming into focus: Beer bars from several cities in Vietnam have already expressed interest in getting James’ assistance so they can add craft beer to their menus.

“Beer places in the Da Lat area are interested in getting start-up help so they can brew themselves or have the beer shipped to them from Langbiang,” explains James.

The K’BE Wood-Fired pizza and barbecue and the Langbiang Craft Brewery are drawing a lot of attention and certain to make a mark on the dining and beer landscape in the area and around Vietnam.

So it’s quite ironic that James comes from an area which proudly displays the Oak on its emblem, because as we all know, from little acorns grow mighty oak trees, and the K’BE Langbiang Craft Beer operation is going to grow in a very big way!