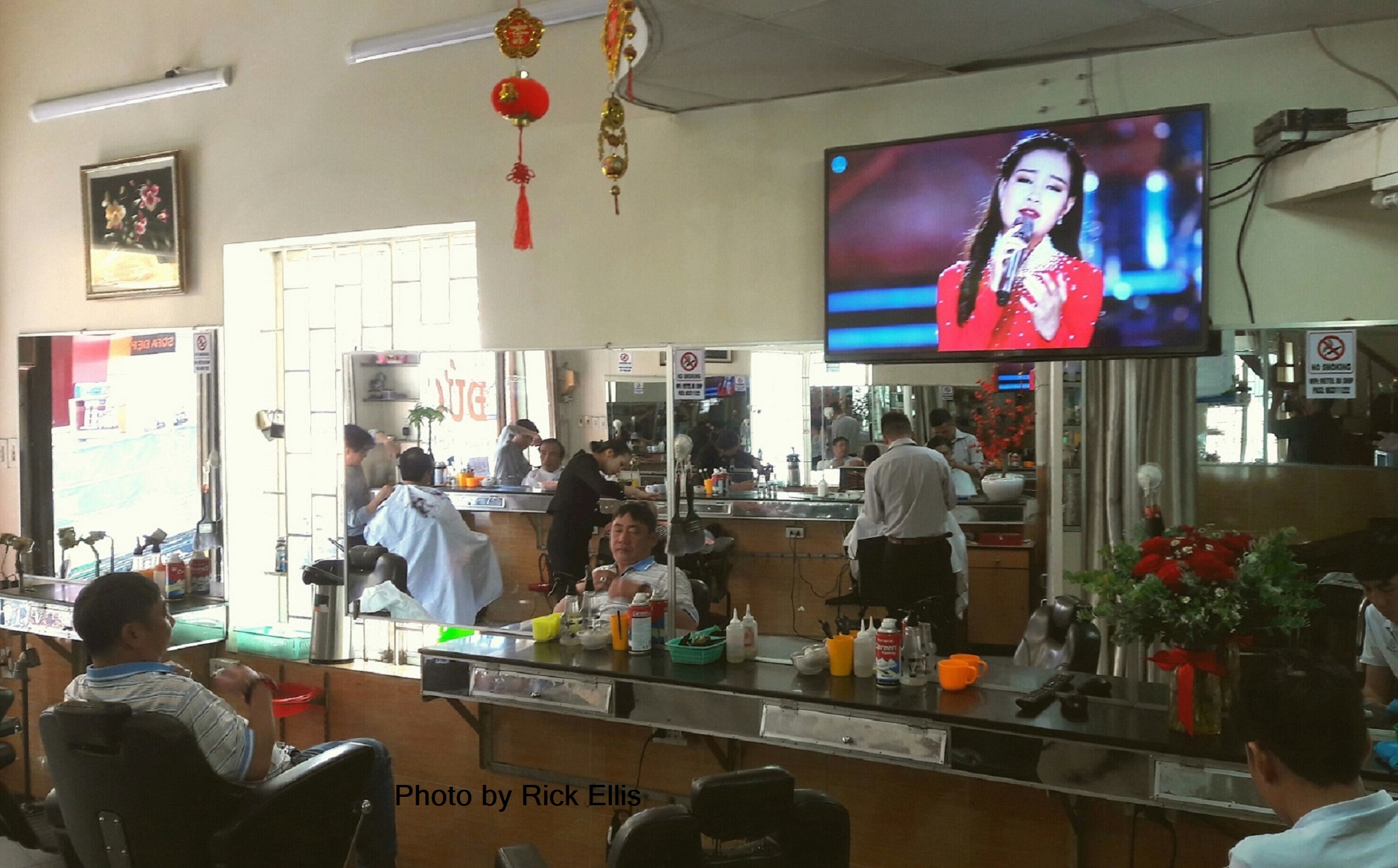 A haircut can be dangerous

Finding a good barber is always tricky business, moreso overseas in a city where one is unfamiliar with the turf. If on top of that we have language limitations, it can be downright perilous. Go in for a trim and come out bald – I’m sure it happens!

A haircut is a necessary evil, sort of like shopping. God, I hate shopping, but it cannot be avoided. I shop, then shop again for the stuff I forgot first time around. A haircut is riskier – if it gets screwed up you can’t go back and get it fixed, nor buy a replacement, so a lousy cut will be on display to the world for several weeks.

When I lived in Da Nang I frequented a neighbourhood barber shop staffed by a stern, businesslike owner and a couple of young girls who whispered to each other all the time. No need to whisper since I couldn’t understand anyway, but whisper they did.

That team had an intriguing ear de-gunking method: they wore lights strapped to their foreheads, like miners’ helmets, so they could see deep into each victim’s ears as they poked, prodded, and removed the gunk. Then, strangely, they proudly applied the extracted gunk to the victim’s right forearm, probably as evidence – proof of the value of their work. Yucky, but I went along with it.

Then I moved to Da Lat and thought I had it made when I scored a great barber right away thanks to a tip from a local friend.

That barber shop was hidden down a little alley, so you really had to know where you were going or you’d never find it – my kind of place. That barber specializes in a military buzz cut which suits me down to the ground – not stylish but lasts a long time. He just whips out those clippers and bashes away at it, sort of like cutting a hedge.

One time I headed down that alley and the shop was closed with a sign displaying an address in another part of the city, so I concluded with much anguish that he’d moved to a new location out of my range. If I can’t walk I don’t go, that’s my preference.

On another recommendation I tried a nearby place but it was pretty scary. I don’t think the young man who cut my hair had been in that job for very long, so I ended up with one of those mussed-up modern cuts that looked to me like I had just gotten out of bed in the morning after a rough night out.

Strolling around I would see places that do funny colours, tints, tones, dyes, nifty scalp art designs, perms, straightening, curling, and hair ironing or whatever it’s called, but I’m old school and see it all as a waste of time, never mind money.

Then I randomly happened upon my current barber shop – I could see the seasoned and confident staff through the window and sense an aura of professionalism and experience. The shop is not new nor is it frayed at the edges, it’s just nicely broken in, like a car after a couple of years. It’s well equipped, laid out, and busy, a good sign since the last thing we want is a barber shop with no customers.

There was the stereotypical elderly boss lady lurking in the background, about half a dozen barber chairs spread around, male and female barbers on the job, broken heart CD music in the background, the usual couple of family babies being passed from one set of arms to another, and the whole thing just felt right.

A variety of services were being rendered at the workstations – the old-fashioned straight razor shave (customer leaned way back like at the dentist), an ear de-gunking or two, and a couple of haircuts. The vibe was that of an oasis of peace and calm with that broken heart music in the background, the customers relaxed and dozing while the staff worked on them.

The stations were neatly equipped with all sorts of scissors, electric clippers, and razors, plus retro-style brushes that reminded me of far back into the last millennium – one for applying powder to our finished hair, another for concocting shaving foam.

Several metal stands containing ear de-gunking equipment were parked in a corner with a variety of instruments hung from them. Some for probing, others for digging, scraping, and scooping, plus a couple of fluffy ones that looked like old dandelion puffs, probably used to ensure a pleasure-filled end to the operation.

The first barber I had in that shop was very competent but didn’t cut enough, so I was forced to return a couple of weeks later. I learned a valuable lesson: look at the barbers’ hair and you’ll get a good idea of what he’ll do to you. His haircut is stylish but rather long for my tastes.

Next time I visited he had a customer, so he motioned in the direction of his colleague a couple of chairs over. The colleague was young so I feared he would try something slick with my head, but he himself had a very short military style cut, so I crossed my fingers hoping he’d hack the whole mess off, and that he did.

My new barber knew my name, or at least what he thinks is my name. I’ve never met anyone from that shop in a social setting, nor have I bumped into any of my buddies there, so how could he have found out who I am? Should I be concerned?

He motioned me to his chair and said “Erris” which is how Ellis usually comes out because a vowel followed by an “L” does not fit the uninitiated Asian mouth very well. Some people get muddled between the “Rick” and the “Ellis” and call me “Eric,” which makes more sense than “Rickel” would.

I confess I can’t pronounce Vietnamese names any better than locals can say mine, so what the hell, I’m just grateful they call me something nice.

On to the haircut: have you ever tried using Google translate to describe a haircut?

Explaining it to another native English speaker is already tricky enough: “A little long on the sides, but not too long, thin on top, but if it’s too thin the hair will stand up, part on the side” is wide open to interpretation. God only knows what rubbish Google spewed out in Vietnamese, probably something like, “Just flail away at it, this silly foreigner won’t know the difference anyway.”

Either way, the barber grasped the requirement instantly and went to work. He sliced and chopped, trimmed and thinned, and then shaved all around the ears and neck, which is crucial to any haircut in Asia.

The top can be a complete messy mop, but around the ears and neck it must be impeccably clean-shaven so as to not appear unkempt.

Low and behold, his cut was exactly what I had hoped for, except a lot of gray hair was suddenly visible much to my chagrin. I refuse to have my hair coloured because I’m too lazy and it takes more time away from other activities such as not shopping.

My advice is when you move to a new area, start the hunt for a barber immediately because it may take a few cuts to find the right one. Don’t be discouraged along the way – the right one is out there somewhere, sort of like a soulmate.

Oh, and buy yourself a hat to hide any haircuts that don’t quite work out!