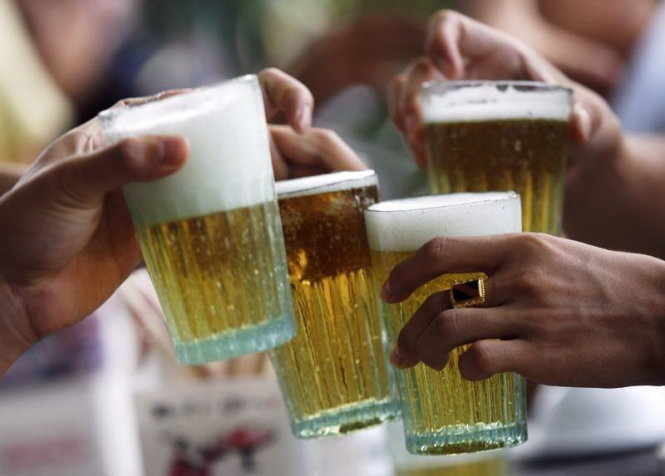 It’s just after 11:00 pm in Hanoi’s Old Quarter. The steady rhythm of plastic being stacked on plastic, of cheap tables and chairs being hastily packed away, echoes through the dark and crowded streets.

In the distance, the red and blue lights of a police truck throw silhouettes up against the aging colonial buildings.

This is the end of another Friday night for Hanoi’s Bia Corner and the message is clear: you don’t have to go home, but you can’t stay here.

For the bia hoi joints on Bia Corner, it has not been a busy night. Not what it would have been before the novel coronavirus laid waste to Vietnam’s tourism industry and the foreign clientele it brought with it.

Bia hoi is a kind of Vietnamese fresh beer brewed every day, matured for a short period of time, and enjoyed at roadside bars in Hanoi.

This slowdown, however, is only temporary. By most estimates, Vietnamese borders will reopen soon and tourists will return.

There is a more permanent threat lurking in the shadows: a rising income and changing taste.

The alcohol market, once monopolized by Hanoi’s bia hoi, is changing. The market is diversifying and the variety of alcohol available and the different types of establishments that dispense it are increasing.

On the other side of Hoan Kiem, in the shadows of St Joseph’s Cathedral, the Pasteur Street Brewing Company (PSBC) is also closing up for the night. But there are no kid-sized plastic chairs at PSBC. This is a classy establishment with hardwood bench tops, sleek metal stools, and a whole range of craft beers on tap.

PSBC’s premium prices, however, were not enough to protect it from the impacts of COVID-19, says CEO Alex Violette.

Less than a month after coronavirus restrictions were lifted, he says, trade has returned to about 70 percent of pre-COVID 19 levels.

This might seem unusual. Craft beers are generally considered the purview of expats and tourists, many of whom have left Vietnam. Violette claims that while this may once have been the case, it is no longer true.

“Over the past five plus years, we've seen a steady increase in the amount of locals coming in and discovering craft beer for themselves,” he remarks.

“I see this trend continuing over the next few years,” he goes on, “and we're actually incorporating that into our expansion plans.”

PSBC has five locations in Vietnam, three in Ho Chi Minh City, one in Hanoi, and one in Hoian. They also run a thriving wholesale trade and Violette says there are signs here that demand is rising, too.

“We've opened a lot of wholesale accounts… not necessarily in city centers, but in some outlying neighborhoods where a lot of locals hang out -- near their offices and their houses,” places where few expats or tourists are generally inclined to go.

William Hicks, in The Bangkok Post, noted back in May that hefty regulations in Thailand were pushing craft brewers abroad. Notably many were choosing Vietnam as a reliable second option.

“Increasingly, brewers are moving to Vietnam to contract the brewing of their beers with local organizations that can offer competitive prices for small batches,” he said.

“Vietnam is offering the best mix of price, quality, and logistical options.”

Violette estimates that craft beer in Vietnam has “well below one percent market share."

It could, therefore, be a long time before it reaches anything near the 13 percent market share it commands in the world’s number-one craft beer market, the United States.

This is not a reflection on the quality of the craft beer being produced in Vietnam.

“Craft beer produced in Vietnam is world class,” according to Brett Simmonds, who founded the social group Appreciating Beer in Vietnam (ABV).

ABV is “A club for beer lovers… in which members get to appreciate some of the amazing brews Vietnam has to offer and seek out new breweries, craft bars and the occasional standout bia hoi along the way.”

Simmonds, with years of experience working in the hospitality industry, thinks that ranking Vietnam’s craft brews in relation to those produced in other parts of the world is not an easy task.

“A beer lover appreciates their beer differently from the next beer lover, it’s an individual taste preference,” he says.

“I personally go for an IPA but it’s hard to decide when I walk into breweries like Turtle Lake, Pasteur Street or Heart of Darkness… don’t make me choose!!!”

Despite his taste for craft brews, Simmonds also has a penchant for local bia hoi. He says, however, that bia hoi and craft beer cannot be compared.

“Bia hoi is a way of life for the people of Hanoi,” Simmonds reckons.

“Light, fresh, and way too easy to drink at times,” he elaborates, adding it is a product unique to Hanoi’s drinking culture, “which craft beer can’t, and won’t try to, match.”

This sentiment is shared by many Hanoians and if craft beer were the only threat to bia hoi in the capital then Hanoi could rest easy.

But coupled with the COVID-19 economic downturn and a crackdown on drinking and driving, the beverage market is moving into unchartered territory.

In this light, these factors combined could be detrimental to the survival of bia hoi.