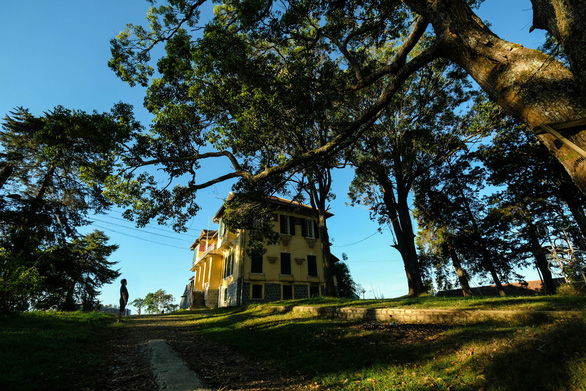 So, what’s happening in Da Lat?

Not a hell of a lot, to be honest, but therein lies its charm and character.

There is a tremendous amount of extremely contagious loafing around taking place at any time. Vendors, taxi drivers, and service staff wait passively for customers to approach, so walking around without being hounded by vendors is a welcomed change from many tourist destinations.

You’ll find a coffee shop within spitting distance anywhere in the city, and they’re bustling more often than not. From humble working-class joints and their tiny stools to fancy cafés with music and sweeping views, it’s easy to find just the right spot to enjoy a brew.

Da Lat is a paradise for hikers and nature lovers with nature trails throughout the surrounding areas and picturesque waterfalls including Pongour, Bao Dai, Prenn, Elephant, and Datanla. Da Lat and a good chunk of Lam Dong Province are the hub of agriculture in Vietnam with coffee, flowers, fruit, and vegetables grown locally and shipped all over the country and to an ever-increasing number of international destinations.

Flower production is the headliner – they’re practically coming out of our ears, including traffic circles decorated with intricate artistic scenes and beautifully manicured gardens. There is a city flower park and an immensely popular flower festival every second year, so be sure to reserve ahead as every bed in the city is taken and people end up sleeping in tents by the lake.

There is even a train in Da Lat that plies a seven-kilometer stretch between the colonial-style train station to Trai Mat, taking about 30 minutes to make the trip through picturesque, hilly farming areas.

The most notable landmark and focal point for rest and recreation are the artificial Xuan Huong Lake, situated at the base of the hill leading to the city core, and featuring cafés, paddle boats, fishing, and a wide promenade that follows the shore, which is five kilometers in circumference.

The city center is clustered around Hoa Binh Theater, which translates as ‘Peace Theater,’ a reminder of how revered peace is in a country plagued by wars and incursions over several decades of the last century.

Hoa Binh houses an old-style cinema, a retro coffee shop facing the square, and an outdoor terrace used for evening concerts and events.

The theater provides the ideal reference point because it’s the dead center of all the action, but don’t get too excited because that comes with a cost. It’s a baffling junction of nine streets without symmetry, where driving protocols and courtesy are largely absent.

Maybe the Da Lat City planners were shooting for a version of the famous ‘Etoile,’ which means ‘star’ in French, the junction of twelve streets at the Arc de Triomphe in Paris, but threw in the towel when they got to nine, thinking that would be confusing enough, a very prudent move.

Some of the streets branching out from the square are one-way, but they are usually ignored by residents and confused visitors alike. The best approach to driving around Hoa Binh is to ignore the signs, if you can see any since some are well-hidden, and wait for bystanders to giggle and yell encouragement when you go the wrong way.

Otherwise, just branch off at the first artery that strikes your fancy without signaling or warning others of your move, and you’ll fit in like an old pro. Should you miss your target, just head back and keep going around in circles until you find it, but by all means keep an eye out for the giggling selfie snappers that congregate by the famous yellow wall at the Coi Xay Gio (Windmill) Bakery, often spilling dangerously out into the middle of the street.

Whatever happens, don’t underestimate how confusing navigation of the city can be, both by vehicle and on foot, due to the number of hills that force the streets to twist around and up and down. The local spin on people-watching is to observe visitors diligently scoping out their route only to watch them disappear down a street, then reappear minutes later totally confused about where they are.

I can only think of one stoplight in the city, but there may be more, so there is little opportunity for motorists to collect their wits, never mind putting a semblance of order in the traffic.

Typically, people don’t come to Da Lat to whoop it up in the clubs all night, then stagger to the beach to recover the next day. Even if they wanted to, there is no beach, unless they drive three hours east to Nha Trang. And even if there were beaches, Da Lat is too laid-back to be a hub of pulsating nightlife.

Fear not, however, there are plenty of bars, great restaurants, clubs, karaoke joints, plus many craft beer bars have popped up, so visitors have many fun entertainment options.

The warning signs of petty crime common in cities around the globe are conspicuously absent: helmets are routinely left unattended on parked motorbikes, cellphones unguarded on tables in shops and cafés, and pedestrians wander the streets without clutching their bags and looking suspiciously over their shoulders.

The shopping scene in Da Lat is somewhat humble, with most activity centered around the enormous Central Market, which has pretty much everything under the sun – if you can find it, that is. It’s a maze of buildings and alleyways, a labyrinth of tiny stalls in each, but the vendors are friendly and passive, making it a great place to stroll around.

Be vigilant as those stalls are small, items for sale are crammed in everywhere, piled up high and hanging from ceilings and poles, so I’ve nearly stepped in a vendor’s lunch on several occasions.

The shopping site which most resembles a mall is the Big C complex adjacent to Xuan Huong Lake, designed with the structure built into the hill alongside the lake, thus unobtrusive, cleverly disguised, and practically unnoticeable.  The downside is it’s nearly impossible to figure out how the hell to get inside the complex, then equally confusing to navigate the way out.

Head for the hill with the enormous plastic pine cone on the top and hope for the best.

Those who can solve that puzzle find themselves inside a Western-style supermarket with all food and household products, both domestic and imported, so you’ll find what you need.

Seafood in Da Lat is schlepped in from Nha Trang and sits in tanks at restaurants and in neighbourhood markets, and there are some tasty local fresh water offerings. This seemingly trivial point is actually important because it keeps the throngs of foreign package tour visitors away who seek beaches, the ocean, nightlife, and, naturally, fresh seafood.

Less seafood is a blessing in other ways too, necessity being the mother of invention: the local version of ‘Mi Quang’ (originating in Quang Nam Province featuring thick yellow turmeric noodles ideal for slurping, together with chicken and shrimp under a thin layer of broth) is served as a full soup with pork pieces and bones, thus creating a truly unique variation on the original dish.

The corporate fried chicken chains, burger enterprises, and endless pizza places struggle to secure a market in Da Lat thanks to the local fare being delicious and affordable.

Pizza faces stiff local competition in the form of ‘banh trang nuong,’ a grilled rice sheet covered with hot dog, cheese, egg, and spring onions, which comes in at a fraction of the price of a pizza with a lot of Asian taste appeal. The sheet slides hot off the grill, gets folded and wrapped, and is then best eaten with the hands, much like a Mexican burrito.

I suppose the big corporations will ultimately prevail by bidding exorbitantly for the old mom-and-pop family properties that dominate the landscape, but it won’t be without a struggle. The locals are fiercely proud of this original city – authentic in a world of cut-out templates where it seems every destination looks the same.

Da Lat has escaped the tacky tourist shtick, stubbornly clinging to its traditions and charms, thus far escaping the big international retail and fast-food conglomerates for the most part.

I’ve certainly made the tour of Southeast Asia many times over, and there is no other destination decidedly Asian, yet sprinkled with cultural gems of colonial times, and blessed with an unparalleled climate. For something truly unique, forego the ocean, beach, and seafood and instead experience a thick slice of the real Vietnam up here in the hills.

Think of your trips to Da Lat as a ‘two for one’ special, where you can experience this unique Vietnamese destination and simulate that trip to Europe you’ve always wanted to make but never could.