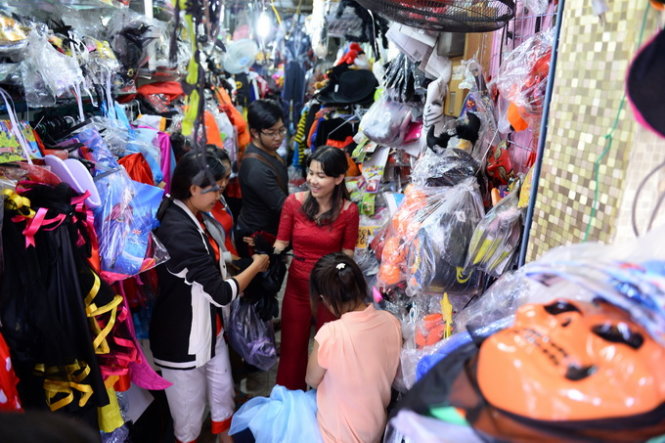 “So, what are you doing for Halloween this year?”, I asked.

“I’m an Anti-Halloween person”, he said.

Hey? What? was my initial reaction. I was quite startled as I still have a boyish sense of fun and love silly occasions simply as a means of relieving the daily stresses in my life. What’s wrong about Halloween? I know a few other expats around Hoi An who hold similar views.

My friend thinks the whole Halloween thing is pointless and wasteful. From his point of view, at a time when Vietnamese families are struggling to make ends meet and every dong will count, why should locals spend money on an imported, commercialized tradition from America that has nothing to do with Vietnamese culture, customs or beliefs?

Another friend also discourages the celebration with native schoolchildren because it’s not relevant to their culture and it’s expensive to set up, as it relies heavily on costumes, props and staff time, which my friend believes could be better invested in genuine educational festivities.

You could probably make the same case about Christmas. It’s not a local custom, it’s incredibly commercialized with saturation marketing, involves costly street decorations and arguably another financial burden on Vietnamese families, especially as the massive drop in tourism and business has led to an extraordinary loss in the number of businesses and jobs.

So… is Halloween just a bunch of expat parties and school festivals resulting in a pile of use-one-time toys, costumes and knick-knacks piled up in the corner of the kids’ bedrooms or a merry moment of frivolity that puts everyone in a good mood?

And the argument against Halloween doesn’t hold much water, as far as I’m concerned. Let’s take the Mid-autumn festival as an example. It’s once a year, is marketed to kids and families and arguably just as expensive as foreign events that occur in Vietnam. The parallels between Halloween and the Mid-Autumn are strikingly similar. Both are commemorations of the harvest season, both have elements of ghostliness, spirits and dressing up, both are considered are children’s events.

The ‘expense’ factor is accepted by most people as part of the cost of participation and people spend up as big as they can manage given their current financial situations – it’s the parents’ choice as well as for young adults who love a party anyway! (Me too!)  Drums and costumes for Mid-Autumn don’t come cheap either and that doesn’t take into account the household spending on party food or those displays of food and goodies at the front of the house.

I’m also not convinced that locals are ‘pressured’ into purchasing stuff within tight budgets. Vietnamese love to party too. Just witness any massive traffic jam around Christmas as folks slowly drive around enjoying the buzz of a big crowd having fun. I would imagine the cost of the Lunar monthly household table displays are very likely more costly as you count the cost of a year.

The difference between necessary cultural celebrations and optional events is mostly a fine line. What’s ‘expected’, the ‘have to do’ markers of the culture don’t really feel like pressure. I would think that pressure from families to get married and have kids is much harder to deal with.

Interestingly, the only real festival anyone of us really agrees about is New Year even though many of the issues in this story are relevant to that event as well. But who would want to confess being ‘Anti-NYE’? Not me, baby! Funny how many people hate birthday’s but love to farewell the past year and hope for something better in the coming year. Should I condemn the wastefulness and frivolousness of party hats and champagne?

For the most part, regardless of the kind of celebration, they are basically middle-class affordable events. Poor rural Vietnamese wouldn’t do much, if anything, for many festivities except for the Lunar moon displays so I can’t imagine that there would be any significant financial impact apart from what I’ve already mentioned.

Up to now, crowds and social distancing have discouraged a lot of events from being held. However, these constraints have built up the inevitable need to let off steam, be it adults or kids. Whether you’re disgusted about commercialization or needless pressure on families; there are benefits to partying on!

One funny point that yet another friend pointed out is the ‘role-playing’ aspect of Halloween, a chance to leap out of your personal shell and pretend to be something or someone else. It’s a fabulous opportunity to be bolder and unconcerned with our usual well-behaved selves. You can see the exuberance and energy when the kids bang the drums on the streets or adults dance badly at Halloween parties.

In the end, it’s all just hokum. Fun for other reason than that it’s there be experienced. So, I say, spend away! Waste some money and time! Halloween should never be cancelled! Life is there to be enjoyed as often as we can manage to do that.

Besides, one day we will all be ghosts partying away beyond midnight…

Happy Halloween everyone and I’ll meet you at the graveyard!