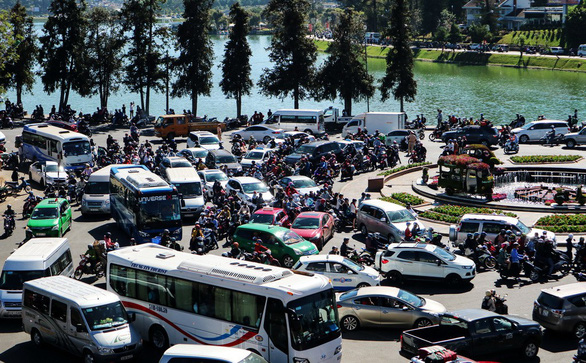 Hurtling toward the point of saturation

If the development of Vietnam was a kitchen sponge, we’d have to stop, give it a squeeze, then rinse and wring it out before trying to sop up more.

The rate of progress is akin to trying to drink water from a fire hose, it’s all happening so quickly.

Reality hit me right between the eyes for the umpteenth time upon the introduction of the ‘New Stoplights’ in town, which I recently analyzed to death.

The intersection is creative and bold – lights flashing and blinking, artistically painted symmetrical lines, arrows in the turning lanes, and there’s even a guy selling steamed corn on one corner.

The issue is the vast majority of drivers are unable to decipher the various symbols and traffic flows, nor do they know who has the right of way at any point in the flow.

There is nothing wrong with the drivers, they’re nimble and skilled, they’ve got all the moves. If anything, all the clean air and yummy fresh produce in these parts hone their wits, but it’s just too much to take in at once.

A few years ago, I could easily navigate the street I lived on in the city center and hardly see a car, but now they’re all over the place, and that’s just the driving part – the real fun starts when trying to park the cars.

We need to take our feet off the gas pedal; not stop (God forbid anything moving slowly in Vietnam), rather just coast for a bit, and ask the big question: ‘What does Vietnam want to be when it grows up?’

I’m certainly not the purveyor of the magic potion because I’ve been asking the same question of myself for decades, while life unfolded in a haphazard way, fate dispatching me in directions I never would have imagined.

While I’m still no closer to seeing my life’s mission, the shiny side of the coin is I stumbled upon an inspiring volunteer opportunity at the new intersection!

I’ve begun shepherding nervous little old ladies across the street, and, believe me, business is booming. I suppose the men are safely sequestered in cafés because I rarely see any on foot at the intersection.

The ladies are blissfully unaware of the walk signals mounted on the stoplight pole several meters from the crosswalk, never mind knowing how they work, and, understandably, would anyway be leery of compliance by harried drivers.

Me: “Ba! (Grandma or madame)” grabbing one such victim by the hand.

Lady: “Who are you calling grandma? You’re no spring chicken yourself!”

Me: “Hang on, here we go, close your eyes and hold on tight.”

We wobbled across the street with vehicles whizzing by, relieved when we reached safety on the other side.

Lady: “Smart ass!” (muttered under her breath), glared, then strutted off.

I sense she was having a rough day before I appeared in her life, or maybe she was just bummed that she needed help to cross, from a foreigner no less.

In my defense, how the hell would I know what to call her?

I gave up learning personal pronouns in Vietnamese long ago – the list of which is a mile long, and, from a foreigner’s perspective, depends on some fairly bizarre criteria.

Hot tip: Don’t ask the pedestrians if they need a hand, just grab them and set sail, chances are they’re surreptitiously hoping someone will happen along and lead them across the street, but it would put a dent in their egos to admit it.

And thus Grandma and I defeated the intersection, but I’ll be watching for her next time, better prepared to fend off any assertiveness she may dish out.

If it’s any consolation, most developed countries don’t have the whole traffic thing figured out either, far from it.

Jammed freeways connect to other jammed freeways, crumbling roads and bridges abound, airports are overloaded, and rail networks are neglected and underused, a fraction of what they could be.

Vietnamese friends planning trips to the U.S. solicit my advice, with California being a hot destination thanks to the hundreds of thousands who form the overseas Vietnamese community there.

I show them maps of greater Los Angeles, hearing them gasp as I explain that the arteries displayed on bird’s-eye views aren’t streets, they’re freeways!

There are dozens of them, all over the place, packed with cars moving at a snail’s pace.

One driver: “Dude, what the heck is going on in front of us?”

Other driver: “Nada, there are just too many cars bro!”

One: “What should I do now? I’ve run out of people to call.”

Other: “Grab the next exit, let’s go for a cuppa!”

(Angelenos affectionately put ‘the’ in front of freeway numbers, as if they were friends, which I guess they are in a perverse way.)

Other: “By the time you make it, you’ll have to turn around to get back.”

Desperate drivers pay large sums to procure life-like dummies and sit them in the passenger seat, thus gaining access to the carpool lanes (sections of road reserved for vehicles with multiple occupants) to shorten commute time.

Others just hire people who station themselves at freeway entrances and bus stops to sit in the passenger seat of their car, a practice known as ‘slugging’ (as in using a fake coin in a vending machine).

Parents wait on pins and needles for their offspring to turn 16, not to celebrate reaching another milestone approaching adulthood, rather to get them driving themselves to their boba tea dates and soccer games.

What about the high-speed train network that has been under consideration in California for as long as I can remember? Fact is people think it’s not cool to sit on a train, so they prefer the liberty of a car, or at least the illusion thereof.

And that, folks, is what future ‘freedom’ looks like on the roads and rails of Vietnam unless priorities change.

Motor vehicles are becoming so trendy here in Vietnam that recently a young professional woman in Ho Chi Minh City was nearing the purchase of a condominium, but instead chose to buy a car.

A car over a place to live!

Good grief, where are we headed? Nomadland?

There is good news on several fronts; first and foremost, every measurable gauge of economic progress indicates continued success. They’ll be plenty of cash to allocate to whatever initiatives are deemed viable.

A high-speed rail network for Vietnam has been in the works for quite a while, currently awaiting the green light with possible groundbreaking in several years, which makes live operation a very distant twinkle in our eyes.

The topography of Vietnam is just begging for a north-south high-speed network with studies showing the leg between the capital Hanoi and Ho Chi Minh City could be completed in just over seven hours.

No fiddling around getting to the airport then to the city center upon arrival at destination. Just hop on the train, relax and enjoy the service, work a bit, sleep a bit, and bingo, before you know it you’re where you want to be.

Vietnam teamed up with Japan on design and feasibility, a clever move as without question the Japanese are the champions of trains.

Japanese travelers often don’t consult schedules prior to embarking on shorter journeys, they just show up at the train station, confident that a train will appear in a jiff and whisk them to their destination, which is absolutely standard procedure.

Despite those obvious benefits, I’m concerned there may be a lack of urgency on that network here in Vietnam, and the project could linger in the design phase until we’ve paved over a good chunk of the country.

In the meantime, if it’s any solace, I’ve got the neighbourhood intersection covered, a gig is a gig when you don’t know what you want to be when you grow up.