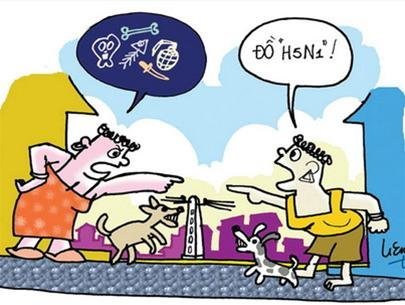 Any foreigner who can unscramble the rich tapestry of the Vietnamese language deserves the keys to the city, a Nobel Prize, a Golden Buzzer from Simon, and, while we’re at it, let’s toss in an honorary ambassadorship.

The plethora of homonyms, at least to the Western ear, is an exciting feature, as there is nothing more catastrophic than calling someone a horse’s ass when you simply want to wish them a nice day.

It’s not as if the language had a few ups and downs here and there as does every tongue, but conveying even the simplest sentiments can be precarious.

It’s damn good that most people know ‘I love you’ in English, for sorting the ‘em’s’ from the ‘anh’s’ and the north from the south is quite a hurdle.

Let’s look at personal pronouns in Vietnamese because addressing people is the first and most basic step in any relationship, thus a logical starting point.

That innocent initial greeting can create an indelible impression, but is often the first step into quicksand because we cannot know which personal pronoun to employ without first taking a stab at the age of a person.

If we overestimate age we risk getting kicked in the pants because it implies the person we’re addressing looks older than they are, so with the first words out of our mouths we’ve already insulted the person.

Underestimating age can be taken as a compliment, but also can be construed as condescending, so either way we’re in a pickle.

It’s a chicken/egg, Catch-22 situation: we can’t ask the other person their age without using a personal pronoun, and we can’t use the applicable pronoun without gauging their age.

Guessing won’t work because there are simply too many options: ‘anh, chị, chú, bác, cô, dì, bố, mẹ, ba, bà, em, con, cháu, ông,’ and a truckload of others I can’t even remember.

Age, gender, and relationship to the speaker are the key components of the personal pronoun jigsaw puzzle – older, younger, male or female, followed by ultra-super specific incredibly minute criteria that come into play.

The attributes go on and on ad nauseam, right down to whether the person we’re greeting is a blood relative, their shoe size, and the amount of dirt under their fingernails.

A few workarounds are worthy of consideration, but they’re not very robust, so use these at your own risk. Not to worry, the Vietnamese are well aware of the challenge and are gracious as always while they laugh their heads off on the inside.

I knew one foreigner who addressed every Vietnamese person as ‘em’ irrespective of status, age, or gender. One size fits all – bank employees, taxi drivers, government officials, and shopkeepers, which elicited stifled snickers among the victims but, in a twisted way, got the job done.

Conversely, you can speak up a social level to everyone except little kids, thus calling all males ‘ông,’ more or less ‘sir,’ and all women ‘bà,’ or madam, although both these terms are usually reserved for the most elderly – e.g. grandpa or grandma.

People will wonder why a random, deranged foreigner is addressing those more youthful as if they were aged royalty, but at least it shows respect, as opposed to engaging a policeman as if he was a runny-nosed little kid.

We can also strive to avoid situations requiring tricky judgment of people’s ages. In Vietnamese banks, most of the customer-facing employees are female, neither very young nor elderly, thus comfortably in the ‘cô’ (miss, aunt, or whatever it actually means) range.

Test it out by going into a bank, surveying the situation, and hollering ‘Cô ơi!’ then watch the heads snap in response.

Tip: Don’t yell too loudly or they may think a stick-up is in progress.

Whilst shopping we can scout out the vendors and select one by age. Let’s say there are three women selling fruit in the market, one looks like a teenager (in reality she’s probably 30), one middle-aged, say 50ish, and the third seems to be in her 70s.

Make a beeline for the youngest vendor, call her ‘cô’ and you’re off to the races. This scenario is bizarre by any measurement, but desperate times require desperate measures, so when you need a confidence booster it’s a good tool to employ. Still, who in their right mind would wander around fruit stalls looking for a vendor of a certain age?

Another idea is to not greet anyone that you don’t already know, thus squashing the rigmarole of age and title estimates, eliminating the entire problem right at the source.

Vietnamese people do it all the time, walking into a shop and starting right in with what they want, no time to waste on formalities. They just spit it right out: “I’ll take a coke and a phone card” or “Two bowls of noodles to go.”

That won’t work for me because I’m too old school, so every interaction must be initiated with ‘hello,’ terminated with ‘goodbye,’ and have a ‘please’ and ‘thanks’ in there somewhere, maybe even a ‘you’re welcome.’

This one is another stretch, but we could ask a common friend before actually engaging in a conversation with the person in question.

Say this scene takes place at a Vietnamese wedding with everybody and his brother present, per usual custom. I know the whole gang except one person, so I approach a friend hoping he can help solve the riddle:

Me: “How old is that lady over there?”

Me: “Whoa dude, we’re about the same age! I would have thought younger.”

Bao: “Yep, she takes care of herself, wears her ninja outfit even if there is only one single ray of sunshine.”

Bao: “Puts cucumber slices on her eyes every evening too.”

Bao: “I’d go with ‘cô’ and cross my fingers that it strikes the right chord.”

If all that isn’t enough, usage of personal pronouns often varies by region within Vietnam, so what works in the south may not in the north, never mind central Vietnam, which is – symbolically – betwixt and between.

I’ve never heard anyone say ‘chú,’ which is apparently a much younger person, used commonly in the north.

The Vietnamese always pull that trick – they lead us on so we’ll think we’re forging progress, then they throw in that ‘but in the north it’s different’ business, just to remind us that we will never defeat this language.

In desperation I conceived my own little system, consisting of addressing younger to middle-aged women as ‘cô’ (ignoring ‘chị’ since I can’t figure it out), men of nearly every age as ‘anh,’ and elderly men and women as ‘ông’ and ‘bà’ respectively. I use ‘em” if it’s a kid of either gender, thus arming me with enough options to survive in any daily situation.

Despite its obvious flaws, the system has been universally well received; at least nobody has burst out laughing, smirked, snickered, or swatted me up the side of the head.

This foray is not intended to be a jab at the Vietnamese language (although by any measure it’s an absolute train wreck), rather an attempt to find a way out of the maze without too much collateral damage.

English isn’t exactly a walk in the park either – just look at the number of native speakers who screw up ‘there, they’re, and their,’ or who say ‘could of’ instead of ‘could have,’ not to speak of butchering ‘which and what,’ which always makes me cringe.

If English is that messy for us, how do those trying to learn it feel?

Foreign students, you can be comforted to some degree that we have at least this one unambiguous and simple term: ‘you.’

Traveling during Tet not a good idea: expats

They have experiences to tell