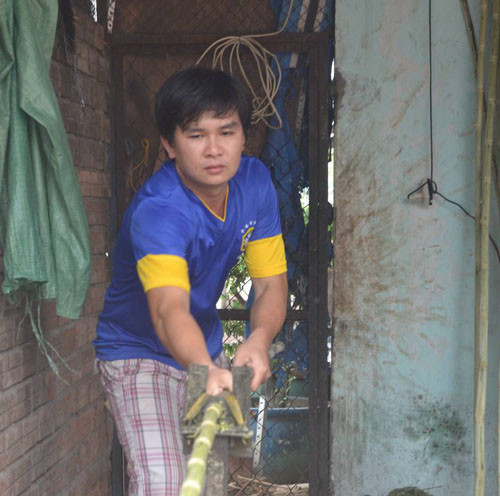 Dang Van Hung, from the Mekong Delta, is disillusioned as three of his children have no choice but to work in areas they were not trained for, something he did not expect when obtaining a VND100 million (US$4,700) bank loan to pay for their higher education at a teacher training college a few years ago.

Similar examples abound in Vietnam where college graduates are desperately battling unemployment, with many resorting to becoming temporary blue-collar workers or even tending livestock and cattle for a living.

Hung’s eldest daughter, Dang Thi Hieu, had been through one of the darkest times in her life before finally landing a teaching job at a school in her hometown, Dong Thap Province. Hieu, who graduated from Dong Thap University along with her sisters, does not know what the future may hold after teaching here for only two months.

Hieu’s younger sister Dang Thanh Thao has a BA in teaching physics, but is still looking for a full-time job.

His other two daughters, identical twins Dang Thi Thu Thao and Dang Thi Thanh Thao, could not find a job in the education sector so opted for working at a call center for a taxi firm in Ho Chi Minh City. The siblings had been factory workers for a catfish exporter in Dong Thap for a brief period.

Even worse, Dong Thap University says over 3,000 graduates remain unemployed at the moment while more than 1,600 more students will graduate in the 2013-14 academic year.

Jobless for a long time, Le Trung Hieu decided to enroll in a second-degree program at the University of Economics in Ho Chi Minh City to hopefully increase his chances of employment.

“But I am not sure whether the future will be brighter when I finish my studies,” Hieu said. “I have also applied for jobs at several companies but never received a reply from them.”

Hieu earned a degree in food technology at a big public university in the city in 2008 and was hired as a quality control worker at a local company before being laid off two years later.

He moved to Long An Province, 30km south of HCMC, to tend ducks, chickens, and cows for a living for one year, as suggested by an acquaintance. He was able to save a mere VND2 million ($95) when he returned to the city to continue his job-hunting.

Hieu has submitted at least 50 job applications since getting back to the southern metropolis, he said. However, he will not travel back to his hometown – a last resort for many jobseekers – where it would cost him a fortune to get a job.

Đ.T.T. has searched for a job since 2010 when she gained her master’s degree in teaching biology from the pedagogical school under the University of Da Nang, located in the central city of Da Nang.

T. traveled the country to hand in applications in person as requested by recruiters but her effort has never paid off, even once.

During the whole process, she has had to do all kinds of temporary work to make ends meet, from tutoring students to serving as a waitress in a coffee shop in Da Nang.

“I am too tired from this job-hunting,” T. sighed.

Another master’s degree holder, V.T.T., has sent her profiles to dozens of employers, but has heard nothing back for the last three years.

T. has already put her degree away and now stays home as a housewife, living on a meager salary from her husband’s work as a public servant.

Vietnam has over 1 million unemployed people, the General Statistics Office says, adding that almost 11 percent of young people, 15-29 years old, in urban areas are currently out of work.