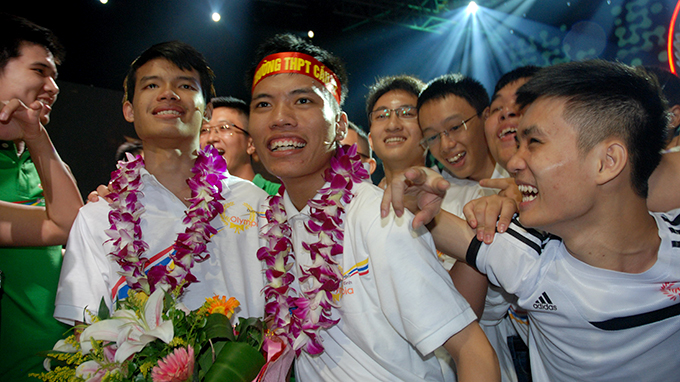 A heated debate has erupted among many Vietnamese people over the choice to stay in Australia rather than returning to Vietnam after finishing their studies of the winners of a national student quiz contest.

Differing opinions have flooded local newswires and social networks since a newspaper article was published last week, pointing out that only one of the 13 winners of the past “Road to Mt. Olympia’s Peak" quiz shows has come back to Vietnam for work after her graduation.

The article was released right before Nguyen Trong Nhan, a high school student from the Mekong Delta, won the 14th edition of the annual contest on Sunday.

National broadcaster VTV has organized “Road to Mt. Olympia’s Peak" every year since 2000.

The competition is one of Vietnam’s biggest quiz contests for high school students and the winner is granted a scholarship of US$35,000 to study in Australia.

So far, only Luong Phuong Thao, winner of the third season, has returned to Vietnam for work after she had earned a master’s degree in Australia.

The newspaper article said that all of the 13 winners had promised to get back to contribute to the development of their country after completing their studies.

So a lot of netizens have expressed their disappointment with these winners, saying they reneged on their commitment.

Many others even bitterly said that the contest has offered talents to Australia instead of nurturing them for Vietnam because it has no rule requiring the winners to come back to work in the Southeast Asian country after graduating from universities in the south-west Pacific Ocean country.

Some even mockingly suggested changing the quiz contest’s name from “Road to Mt. Olympia’s Peak" to “Road to Australia.”

But there are also those who have tried to explain the reason why the 12 champions had failed to return, citing the low income in Vietnam and better studying, working, and research environments in Australia.

People can have two ways of loving their country, some of the advocates said, adding that one is living inside the country and working to contribute to it, and the other is residing in another country and glorifying their homeland country through good achievements.

Others offered a milder perspective, saying not all the winners will settle in Australia, as some of them are just continuing their study for higher degrees.

They said the “Road to Mt. Olympia’s Peak" champions can even make better contributions to Vietnam’s growth in the next 10 or 20 years after they have amassed considerable experience.