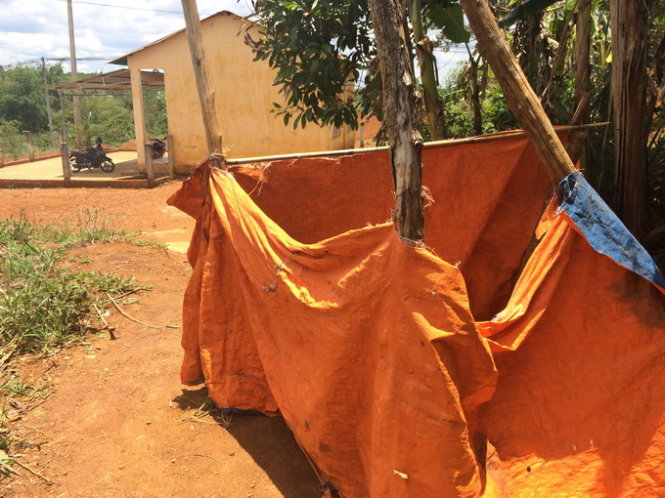 Many kindergartens and elementary schools in the Central Highlands province of Lam Dong have caused difficulties for students since they do not have restrooms.

According to statistics from the province’s Department of Education and Training, Lam Dong currently has 17 elementary school branches, mainly in remote areas, without restrooms, while 40 other school branches have restrooms which are in poor condition and short on water supply.

Bao Lam District has suffered from this situation for years.

Over the last seven years, 205 students from a branch of Loc Bao Elementary School have had to use an empty plot of land near the school as a bathroom.

Le Xuan Mai, teacher of Class 5A2, said teachers at the school even have to go back to their homes, which are 3km away, to use the restroom because neighboring residential houses do not have toilets either.

Dang Duc Nhan, the principal of the school, said though teachers have reported the situation to local educational authorities, nothing has changed.

According to the principal, one of the three sub-divisions of the branch has two restrooms but students are still unable to use them because of a water shortage.

Teachers said the situation has dismayed students and parents since the toilets cost lots of money but are unable to be used.

Moreover, two other preschools in Bao Lam District have also been run with a lack of restrooms for the last three years. Parents have had to create makeshift restrooms of nylon canvas for their children to use.

A sub-division of a branch of Loc Bao Elementary School has two restrooms left unused due to a lack of water supply. Photo: Tuoi Tre

Le Duc, head of the Bao Lam District Department of Education and Training, admitted that many schools in the locality are lacking in many things and have degraded infrastructure with makeshift classrooms and restrooms.

Thanks to the shortage of money, the district’s educational department is mobilizing investment from private sectors to build restrooms at local schools, but it has not received much response.

“Projects to build restrooms are usually attached to classroom construction,” Duc added. “We have to report it if we want to start construction, and then it takes time waiting for authorities’ approval, so we cannot do it immediately.”

According to Nguyen Kim Long, head of the elementary school division of Lam Dong’s Department of Education and Training, the lack of restrooms at local schools has existed for a long time due to subjective reasons.

“Many school branches have only around 20 to 50 students with 1-2 classrooms built on land plots allowed to be used by local authorities,” Long said. “The construction also requires lots of money and the administrative procedure is complicated.”

“Teachers have not put enough initiative into this,” he said. “While the funding is not available, there are still other ways, including building temporary and low-cost restrooms, to solve the problem in the short term.”

“They have to be fierce in working with local authorities as well as mobilizing investment from the private sector to build restrooms,” he added.

The waiver is expected to benefit students and their parents