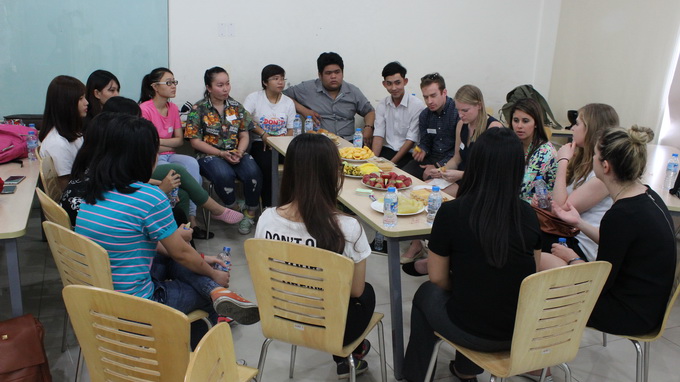 A group of 30 students from Dartmouth College, an Ivy League university, led by a famous historian with expertise in Vietnam, joined an exchange meeting with the Ho Chi Minh City branch of Florida-based Broward College at the latter’s campus in District 7 on Wednesday.

Nguyen Quang Anh Chuong, vice chancellor of Broward College Vietnam, gave a brief introduction about the school’s curriculum, which is accredited by the Southern Association of Colleges and Schools (SASC), to the visiting delegation.

SASC is one of the six regional accreditation organizations recognized by the U.S. Department of Education and the Council for Higher Education Accreditation.

At the event, the American students explained why they visit different countries during their spring vacation to gain knowledge and experience for their major, saying they wanted to learn about the politics, business, culture and society of Vietnam.

Their aim is to increase their knowledge of global commerce leaders in international business.

Broward College Vietnam chancellor, Dr. Hoang Anh Tuan Kiet, then took the stage to brief about Vietnam’s eco-social development, underscoring that the Southeast Asian country has much developed in the past few decades.

The meeting was part of a week-long study trip to Vietnam for Dartmouth students, according to the delegation leader, Associate Professor Edward Miller.

Prof. Miller’s intensive research on Vietnam’s history, especially the war ending in 1975 in the Southeast Asian country, prompted his recommendation to his students to choose Vietnam as the destination for their overseas exchange trip.

Students of the New Hampshire-based college said they made the right choice to visit Vietnam, as what they have experienced in the country was beyond expectation.

“Many of the students who came to Vietnam for the first time were worried… They think maybe when we got to Vietnam people would be hostile and angry because of the war,” Prof. Miller told Tuoi Tre News after the exchange meeting. “But it was just the opposite.”

The historian said what his students eventually discovered after arriving in the country is that many Vietnamese are excited to meet, connect with, talk to, and exchange ideas with the Americans.

“When we walked along Le Loi Street [in District 1], my students could not believe it. The street is so beautiful and modern. They could not believe that they were in Vietnam because they imagined that Vietnam is a third world country which is not very modern. They were really excited to see the changes [in the country] today,” he said.

Madeline A. Dufour, an MBA candidate from Dartmouth’s Tuck School of Business, said she “got a very good deep dive of Vietnamese culture and what it means to do business here in Vietnam.”

“Having the opportunity to travel to a developing country like Vietnam and learn from someone who spent so much time here and has so many connections has been really rewarding,” she told Tuoi Tre News.

“It is really interesting to see Vietnam adopting some American practices in their education system. I have been very impressed by the level of English spoken here at this school. Students are so friendly and it has been a really great trip.”

Nguyen Nhat Thanh, director of student services at Broward College Vietnam, said the meeting was a good chance for his students to meet their international colleagues and experience American education.

The Vietnam campus is one of Broward College’s four International Centers located outside the United States, each of which offers standard, face-to-face Broward College courses identical to those taught in Florida.

Dartmouth was ranked 12th among undergraduate programs at national universities in the U.S., according to the 2016 rankings by the U.S. News & World Report.

Professor Miller is a historian of American foreign relations and modern Vietnam, with special expertise in the war in the country.

He is the founding director of the Dartmouth Vietnam Project, a student-driven oral history program which documents the memories and experiences of members of the Dartmouth community who lived through the war era in Vietnam.