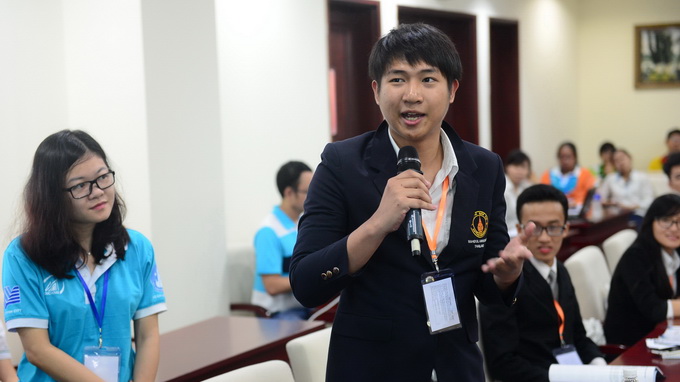 One hundred delegates from six Southeast Asian countries and two East Asian nations attended the first session of an international student science forum which kicked off in Ho Chi Minh City on Thursday.

The opening of the forum welcomed 100 student delegates from Vietnam, Singapore, Thailand, Laos, Cambodia, Indonesia, China, and Japan, together with professors and experts from a range of scientific fields of study.

A group of delegates are seen discussing during a session at the International Student Science Forum 2016 in Ho Chi Minh City, April 7, 2016. Photo: Tuoi Tre

The kick-off ceremony was held at VNU-HCMC on the morning of April 7, followed by a plenary session where leading scholars listed the main topics to be discussed at the forum.

“It is you and the next generations who will assume responsibility for an orderly, sustainable, and friendly region under the guidance of your predecessors,” Duong Anh Duc, deputy director at VNU-HCMC, said during the opening.

The student delegates then took part in four discussion sessions covering the four topics in the afternoon.

Forty-three selected delegates were given five minutes each to deliver a presentation on their topic, followed by a ten-minute open Q&A session.

Dr. Prof. Vo Van Toi expressed his gladness that there have been an increasing number of scientific studies conducted by students in recent years in comparison with the reality seven years ago, when he first returned to Vietnam after working in Europe.

“Such activities as ISSF 2016 will help create opportunities for our students to know where they stand in the scientific research picture of the region, which will push them to try harder,” the professor said. “Another plus for the forum is that it has succeeded in raising at the same time a number of important issues among youths and in the society as a whole.”

Frances Widjaja, a delegate from Nanyang Technological University in Singapore, said she initially only hoped to learn about Vietnam and its people since this was the first time she had been to the country.

Widjaja added, however, that she had gained much more than expected after taking part in the discussions, and expressed her pity that she would have to return to Singapore immediately after the program, whereas there are still so many things she would like to learn about the country.

Meanwhile, Ho An Lac, a Vietnamese delegate from the University of Science under VNU-HCMC, wished the program would have included more presentations from the foreign delegates.

Dr. Prof. Vo Van Toi agreed, saying, “It is surely a pity that there weren’t many presentations from the foreign delegates to exchange with the Vietnamese students. The session that I was in charge of, for example, only had two speeches from the foreign students. I hope this shortcoming will be remedied in the upcoming international activities.”

Centered on ‘Student Integration,’ the ISSF 2016 is the first international-level event the Vietnam National Union of Students in Ho Chi Minh City has ever organized so far.