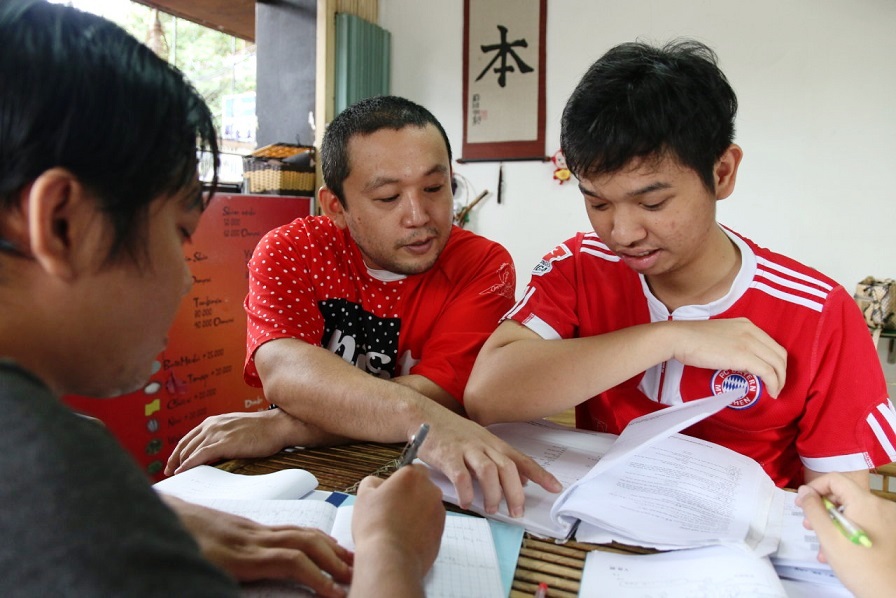 A Japanese man has worked for two years to turn his noodle shop in Ho Chi Minh City into a place where local youngsters can learn the Japanese language for free while diners are enjoying Udon.

Enomoto Toshiaki, 35, teaches Japanese lessons to young Vietnamese in the comfort of diners at an Udon noodle shop he runs in a small alley on Su Van Hanh Street in District 10.

Toshiaki’s lessons often start at 3:00 pm every Sunday. The shop owner always arranges enough tables and chairs for his students even when the place is filled with customers.

Three hard-working students, between 18 and 20 years old, are attending the class free of charge amid the scent and flavor from the broth of Udon noodles.

The Japanese ‘teacher’ started his class about two years ago when he first ran his culinary business in an alley on Le Hong Phong Street, District 10.

He wanted to primarily create a place where Japanese people in Ho Chi Minh and local residents could meet one another and learn languages.

He occasionally invites his Japanese friends to his class for the students to practice their skills.

According to Nguyen Thi Phuc Loc, a Vietnamese employee of the noodle shop, a lot of people attended Toshiaki’s class at first.

“However, the number eventually dwindled as Japanese is a difficult language to learn,” Loc said.

The number of students has gone down from 20 in the first place to three at present.

The Japanese class welcomes several new faces whenever there is a surge of people preparing to study or work in Japan.

Numbers do not matter, Toshiaki said, adding that he is ready to teach anyone who likes to learn the language, even if there is only one learner in class.

“The class is very exciting as I don’t often have the chance to speak to native speakers,” Tran Thi Ngoc Ngan, a freshman who had attended Toshiaki’s class since December 2016, said.

Despite studying at a language center, Ngan still manages to come to the class every Sunday to hone her skills.

“I often order a bowl of noodles and have some chit-chat with my teacher after the lessons,” she added.