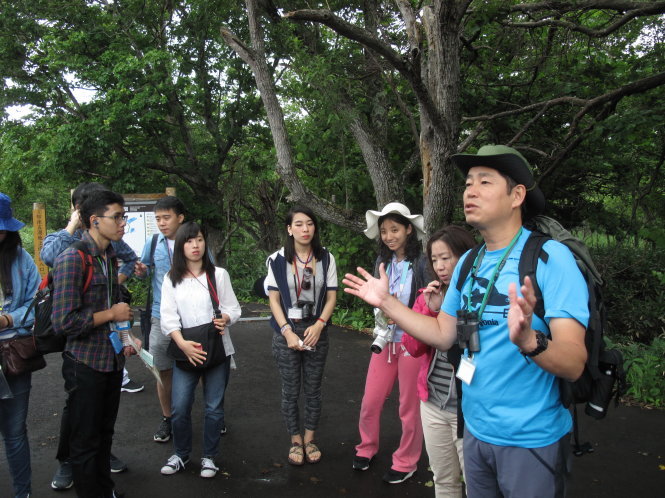 The 2017 ASEP is scheduled to take place in Japan’s Tokyo, Miyagi and Chiba Prefectures from August 1 to 6 under the theme of ‘Biodiversity and Renovation,’ with media assistance from The Mainichi and Tuoi Tre (Youth) newspapers.

A series of activities will be offered to the attendees, including visits to Waseda, Kanda, and Tohoku Universities, planting trees, cultural exchanges, and several discussions.

In order to be qualified as ASEP participants, the Vietnamese students had undergone three rounds of interviews to make sure they have a proper knowledge of the environment and sustainable development, as well as a good command of English.

Doan Trung Hieu, a third-year student, stated he first heard of ASEP through his seniors who had taken part in the event in previous years.

To Hieu, it is a good opportunity to develop skills in teamwork, presentation, discussion, and debate.

“I am trying to sharpen my English ability to become a good representative of my country. Learning new things and different cultures is also my goal,” Hieu elaborated.

Pham Lan Huong, another third-year student, considered herself lucky after being recruited for ASEP for the second year in a row.

“I seek chances to improve my foreign language skill, communicate with global youths, and understand the people and cultures from different countries,” Huong said.

The Hanoi student recounted a lesson she had acquired during her ASEP participation in 2016, which is respecting differences.

All participants in the event share the same goal to preserve the environment and contribute to building a better community, she added.

Huong had partaken in some research projects organized by universities in the U.S. as well as taught children in mountainous Vietnamese provinces about the environment.

Prior to the 2017 ASEP, Do Thu Ha had gained a lot of experience from such activities as Earth Hour, wildlife preservation exhibits, and international conferences on environmental protection.

Ha expected to experience the professional schedule and process of an event organized by Japan as well as exchange her knowledge with other ASEP members.

“With this year’s theme, I hope to have a broader understanding regarding the role of biodiversity in the world’s existence and development, especially when many types of animals have been endangered by humans,” she elaborated.