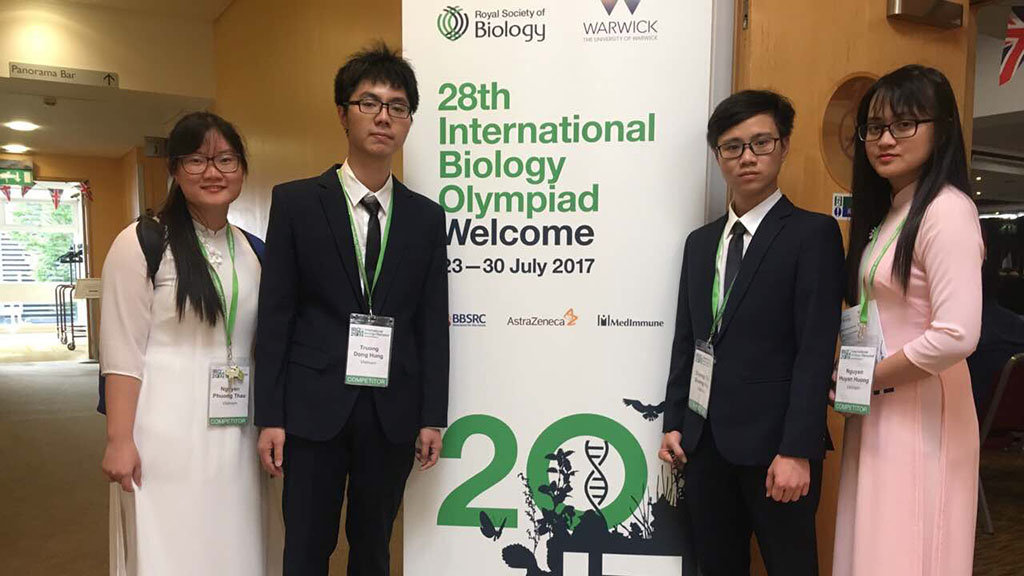 Team Vietnam outdid their predecessors to come 12th with one gold and two silver medals at the 28th International Biology Olympiad (IBO) hosted by the UK.

The IBO is an annual event where pre-university students from all over the world compete on their knowledge of biology.

Organized by the Royal Society of Biology in partnership with the University of Warwick, the 28th IBO ran for a week, from July 23 to 30, in London.

Teams from 68 countries and territories participated in the friendly event, which welcomed a total of 245 competing students.

Vietnam’s four-member team was ranked 12th with one gold medal and two silvers, being among only 14 teams that were awarded gold medals.

The result was Vietnam’s best in its history of taking part in the competition, according to the Ministry of Education and Training.

The country’s only gold medal was earned by Truong Dong Hung, a senior from Quoc Hoc-Hue High School for the Gifted in central Thua Thien-Hue Province.

Hung scored 55 percent and 75 percent in the practical and theoretical exams, respectively, and was ranked 22nd among 245 contestants.

His results were also the best personal achievement of any Vietnamese student who had participated in the annual competition.

Last year, Vietnam welcomed 264 students from 71 countries and territories as it hosted the 27th IBO in Hanoi.

Earlier this month, Vietnamese students competing at international mathematical, physics and chemistry Olympiads also secured the highest achievements the country had ever seen.

Nevertheless, local educational experts have dismissed Vietnam’s growing number of achievements at international science competitions as being a trustworthy indicator of the country’s progress in the field of science.