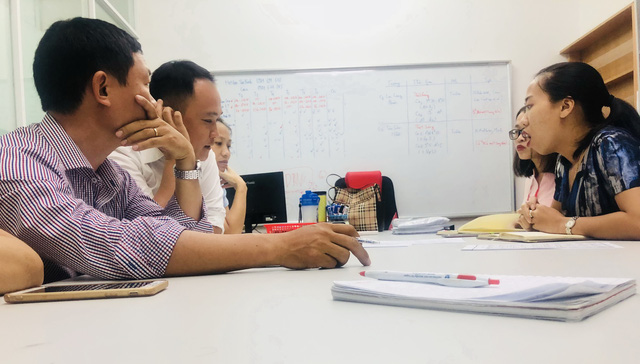 An English center in Vietnam that offers expensive IELTS courses coming with 'a guaranteed band score' is in hot water for failing to deliver on its promise.

Many parents who have signed their children up for such 'full-package' courses are now facing difficulties in claiming a refund.

The English center in question, which has over 20 locations in Hanoi and Ho Chi Minh City, advertises itself as "the best IELTS training center in Vietnam,” according to a description on its official Facebook page.

It claims to have trained "two out of Vietnam's only three people ever to have achieved band 9.0 in IELTS.”

With such a seemingly credible profile, the center has been successful in convincing many parents to enter into legally binding contracts, which guarantee that their children would achieve a certain IELTS score after a number of courses in return for all tuition fees being paid in advance.

H., a parent in Ho Chi Minh City, said he knew of the English center when it organized a contest in early 2017 at an elementary school where his younger child, who is in fourth grade, attends.

Convinced by the center's credibility, H. signed two contracts for his two children valued at over VND100 million (US$4,410) and VND60 million ($2,640) respectively.

According to the former contract, his older child would attend 16 courses at the center over five years, after which the child would be guaranteed to achieve an IELTS band score of 7.0.

"I paid for all the tuition fees on the spot," H. said.

Another parent, T., told Tuoi Tre (Youth) newspaper he had also paid over VND123 million ($5,420) for his child to study there in five years with a guaranteed band score of 6.5.

"I also spread good words about the course package to many of my friends," T. said.

It was only after having signed contracts with the center that the hopeful parents experienced its less charming side.

"It took three months after signing the contract for the center to sort my child into a course, which was also the only one until now," H. said.

"The kids were only handed one worksheet to do in each of the first few classes. The center also went back on its commitment to use only native teachers, which was part of the contract," he added.

According to H., he had voiced his complaints to the English center on multiple occasions but things have not improved.

"With such progress and teaching method, how is my child supposed to achieve the desired score like the center has promised?" said T., who is in a similar situation.

In a recent meeting with H. and T., a center manager apologized for the reported shortcomings but reassured that everything was on course and that the contracts would not be violated.

However, the manager refused to terminate the contracts as the parents demanded, explaining that he did not have the authority to perform the action.

Since then, further attempts to book an appointment with the center manager have been unsuccessful.