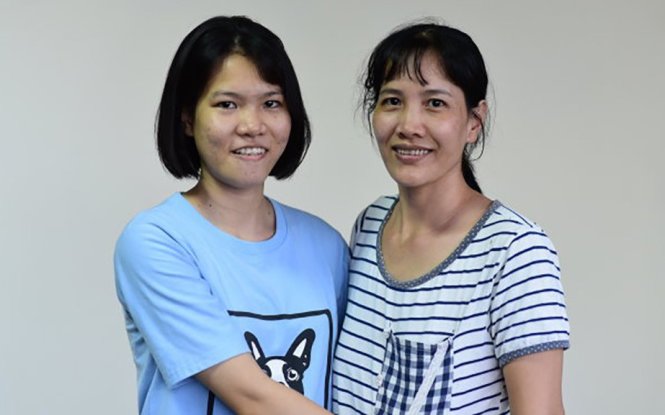 A Vietnamese student achieved an admirable academic performance and was recently admitted to college despite a cancer that she has lived with for over half a decade.

Vien Tran My Linh, 18, was diagnosed with jawbone cancer at the tender age of 12 and suffered from excruciating pain subsequent to the first surgery, conducted in Ho Chi Minh City, around 100 kilometers from her hometown in Ba Ria-Vung Tau Province.

Linh stayed in hospital for two weeks before resuming her middle-school education and rapidly keeping pace with classmates to obtain good marks in all subjects.

The cancer’s symptoms recurred when she turned 14, and she felt numerous tiny worms were eating away in her mandible.

After taking a major exam, she underwent another surgery, in which doctors tried to preserve the form of her jawbone by putting braces into her mouth, which she cleaned every three days.

At 16, Linh once again was hospitalized for cancer treatment, with many books and notebooks carried in her schoolbag.

She was usually seen learning alone on her sickbed.

Upon returning to school, she endured aching pain and low self-esteem stemming from verbal difficulties associated with the disease.

The student received a shock early last year when her father, the breadwinner of a family of five, died from a heart attack.

Her mother’s low income of VND4 million (US$172) a month from sewing was insignificant compared with the massive debt of VND280 million ($12,040), accumulated by the deceased father’s medical treatment.

Linh used to be encouraged by two female high-school teachers to surmount the adversity.

Recently, as her mandible had nearly been destroyed, she was told she would be under the knife again – news that gave her more worries than ever since doctors regarded the eight-hour operation as complicated and costly.

Her mother failed to fight tears when looking at the 3D representation of the daughter’s jaw.

Linh’s grandmother, 80, gave all her savings to pay the medical price tag this time.

The surgery, which was successful, involved removing the entire jawbone and replacing it with a piece of ankle bone.

Linh said she had to always be optimistic in the face of all plights.

“As my mother’s weak, I must be strong so that she can lean against me. If I’m also submerged in sorrow, we may fall down together,” Linh said.

“Life creates difficulties for us. We must accept them. That’s the destiny. It’s futile to be pessimistic.”