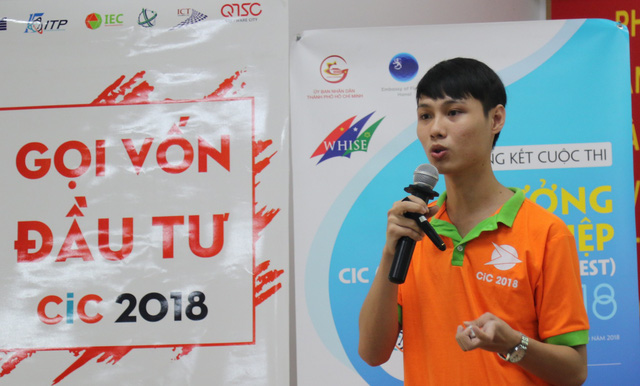 The most outstanding startup projects from the CiC Startup Idea 2018 competition have presented their ideas in the Finding Investors CiC 2018 program.

The program was run by the Innovative Entrepreneurship Center (IEC) of the Vietnam National University-Ho Chi Minh City on October 17.

Through the program, the organizing committee hoped to encourage investment so as to support potential projects.

The CiC Startup Idea 2018 was one of the greatest challenges the students had faced so far.

After approaching over 300,000 students of 35 colleges and community colleges in southern Vietnam, the competition was joined by 130 different startup projects and 300 students.

Having gone through three elimination rounds, as well as several boot camps, skill-building programs, and workshops, six groups were selected the most outstanding.

These groups were then allowed to participate in the Finding Investors CiC 2018 program, where the students had to provide a persuasive presentation in order to convince the most demanding CEOs and boards of the investing companies.

The program held by IEC resembles the recently recognized show Shark Tank, where potential startup projects are also presented to investors so as to receive the funding necessary for development.

The Finding Investors CiC 2018 allowed the contestants to present their projects within five minutes and state the funding necessary for their development.

After the presentation, the young students had to answer the most challenging questions posed by the investors.

Based on the information, the CEOs would decide whether a project was worth funding.

Even though it might appear as a standard procedure, as the students are young and inexperienced, this was a challenging task for them, especially when the questions were from more experienced professionals.

The six participating groups had different ideas, all of which were innovative and intriguing, such as low-cost houses for all environments, smart helmets for motorbikes, and smart college environments combined with technology, among others.

As a result, four out of six projects were sponsored with different amounts.

iNut Platform received the highest funding of VND625 million (US$26,700) for 2.5 percent of the share for their project of developing IoT (Internet of Things) applications.

Three other projects were provided with the same amount of VND300 million ($12,800) for different percentages of their funds needed to develop smart colleges, online training programs, and low-cost houses.