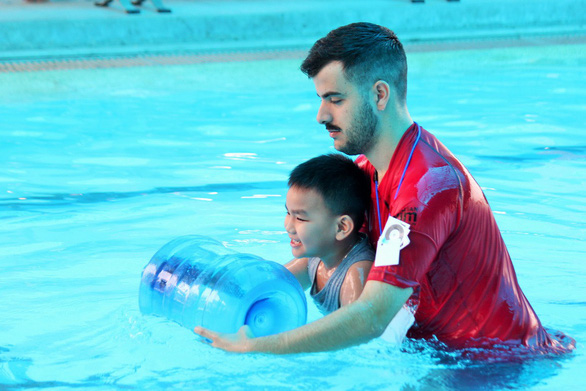 Children in the Mekong Delta province of Tien Giang have received swimming lessons as well as training on how to save drowning victims using branches of coconut trees, which are abundant in the locality, from the Australian Water Safety on the Mekong (AWSOM) Project.

Twenty AWSOM volunteering instructors came to a swimming pool of My Tho Sports Center in the namesake provincial capital the other day to teach children how to swim and help people in distress. Some elderly were among the attendees.

“Has anyone ever known of or seen a drowning victim?” Matthew, one of the volunteers, asked through a translator as he jumped into the pool.

“What do you do when it happens?”

One could hear students of the local Sao Sang kindergarten answering at the same time, “Call adults for help” or “help”.

The volunteers told the kids that the situation can get worse if an inappropriate rescue method is applied, which may result in the rescuer also drowning.

“Due to improper saving, we both drowned!” the instructors said as they demoed a case of incorrectly rescuing drowning victims, winning a big applause from the young audience.

“If the victim is near the shore, we can give the victim a rope or a tree branche to hold onto as we slowly pull him or her ashore,” the Australian volunteer said.

“But do not forget to lay down to avoid being pulled into water by the victim,” the instructor warned as he continued the demo with a branch of coconut tree.

Following the instruction, all of the participants, old and young, managed to finish the practice successfully.

“It is both useful and meaningful to teach children to swim,” Tran Kim Phan, one of the teachers of Bong Sen Kindergarten whose students participated in the free event, said.

Helping children to realize they have a misconception on how a drowning victim should be saved and teaching them the correct rescue method through demos is a great way to help them understand and r memorize what needs to be done, the teacher added.

The Australian Water Safety on the Mekong (AWSOM) Project was launched in 2012 as a result of a successful volunteer tour to Vietnam in January 2012.

The My Tho City People's Committee has requested the project's ongoing assistance with the enormous task of ensuring the children in the region are provided with essential water safety skills and education.

Thirty two children drown daily in Vietnam, according to 2012 statistics by The Alliance for Safer Children.