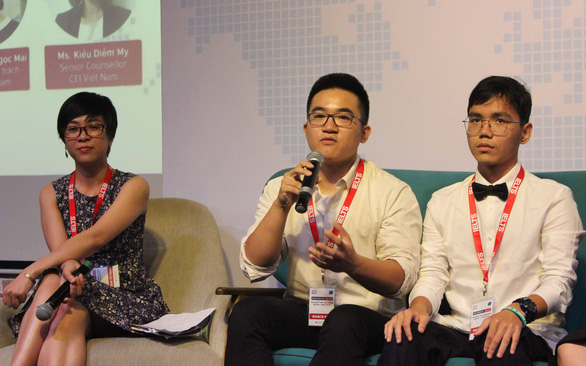 A young man has won a British Council award to study in Canada after creating a YouTube channel to teach Vietnamese youth how to prepare for IELTS exams.

Nguyen Duc Thinh, 25, is the creator of the 5 Minutes About IELTS YouTube channel, where he shared tips on preparing for the IELTS test without learners having to pay big sums for English courses at language centers.

Thinh graduated in English studies from Banking Academy in Hanoi in 2015 and started teaching English at language centers for a year before he run his own English tutoring courses.

In 2017, Thinh tried to make videos teaching IELTS to others as he always enjoys making videos to spread the knowledge he has learned.

“I started making short videos of less than five minutes about tips on learning English, or how to improve listening, speaking, reading, and writing skills for IELTS exams, with topics like vocabulary and grammar,” Thinh said.

The more followers Thinh had, the more he was encouraged to make new videos.

“The comments and thanks from my viewers were the motivation for me to keep making new videos."

There is a great difference between being an English teacher and a YouTuber even though both work to impart language knowledge, Thinh said.

As a YouTuber, Thinh has to think of creative ways to create content and to pass the knowledge, emphasizing that humor is a crucial for attracting the audience.

Other important skills that Thinh has learned is how to speak and act in front of the camera, how to deal with negative comments, and how to attract likes and subscribers without compromsing the content of his video lessons.

Thinh believes the best way to handle negative comments is knowing the importance of what he is spreading and delivering to others as well as understanding that he always does his best so that the comments pointing out his imperfections and complaining about the lessons would not affect him personally.

The number of subscribers and likes seems to be an obsession of all YouTubers and Thinh is not an exception, as the 25-year-old admitted how he moved in the wrong direction so as to attract more likes and subscribers.

“The worst time was when a rookie YouTuber overtook me,” Thinh recalled, adding that the pressure coming from that caused him to deviate from his original purpose and to focus more on entertaining his audience.

But this phase did not last long, as Thinh soon realized the real reason why his audience liked him and started focusing on making useful videos that can improve his viewers’ English skills.

“Gradually I calmed down and tried not to compare myself with others, which used to make me very uncomfortable,” Thinh said.

“Working as a YouTuber is a long and tiring process which needs one to control their own jealousy in order to maintain happiness and useful content for the viewers,” Thinh added.

He believes he owes his good English command to YouTube.

As a college student, YouTube was where he learned English as for him it was the only way to communicate with native English speakers without having to pay great sums of money to come to language centers.

Thanks to his YouTube channel that has over 231,000 subscribers, he realized his love for media and broadcasting, which is also the reason why he decided to pursue this area of study at the University of Prince Edward Island in Canada.

He said that he would make better use of his English fluency in Canada than in Vietnam.

Recently, he won the IELTS Prize 2019 awarded by the British Council, which is a scholarship awarded to high-calibre individuals to enable them to study any chosen course in an undergraduate or postgraduate program of a higher education institution that accepts IELTS as a part of its admission requirement.

“Once I move to Canada, in addition to studying I will still keep on making YouTube videos,” Thinh said.

“Besides English, I will also record my life and my journey studying abroad."

Some netizens have ironically suggested changing “Road to Mt. Olympia’s Peak," the name of one of Vietnam’s biggest quiz contests, to “Road to Australia” after nearly all of the winners have stayed in the south-west Pacific Ocean country since finishing their studies with a US$35,000 scholarship